The Extreme SE derivative adds a welcome dash of style to the Duster Prestige for a modest premium, helping to distract from its cheaper-feeling elements. The mid-range Comfort trim level remains our pick of the range – it’s just an all-round better bet on value for money – but if you want a practical crossover with more kerb appeal while keeping to a tight budget, then the Duster Extreme SE is a good option.

In terms of pure value for money, the Dacia Duster is unbeatable among the SUV ranks. However, you do have to make some compromises to make the low price possible, one notable area being style.

Renault sister brand Dacia has sought to address this, however, with the new Duster Extreme SE. Using the previously range-topping Prestige-trimmed Duster as a base, it builds on that car’s strong standard spec list with various cosmetic tweaks.

First off, there’s the new and exclusive Urban Grey paintwork on the options list. There are new orange accents on the mirrors, grille and the ‘Duster’ lettering above the rear number plate, plus gloss-black wheels. The theme continues inside, where the Extreme SE has been treated to gloss-black door cards, satin chrome air vent surrounds and a whole lot more orange – on the heater vents, door pulls, and the stitching on the part-artificial leather seats.

This treatment doesn’t look drastic on paper, but the changes work nicely, giving the Duster a noticeable uplift in kerb appeal. Inside, meanwhile, the Dacia’s cabin feels far less staid, with those splashes of orange lightening the mood.

Given that the Extreme SE makeover doesn’t have any mechanical upgrades, our TCe 130 4×2 version drives like any other Duster with that engine. The 128bhp 1.3-litre in-line four-cylinder – an engine shared with the Mercedes A-Class – can sound coarse, particularly at higher revs, but as a unit that’s happy to pull strongly in the mid-range, this isn’t so much of an issue. It makes most of its power at 4,000rpm (peaking at 5,000rpm), while a generous 240Nm of torque arrives at just 1,600rpm.

Fuel economy is respectable, with an official combined figure of 49.6mpg. Our test, which featured a lot of motorway driving, yielded an average figure of 38mpg. Getting consumption to start with a 4 shouldn’t take too much effort. 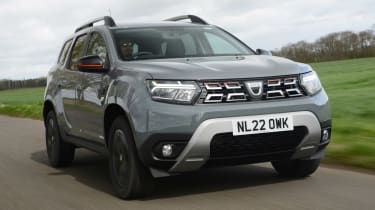 The 1.3 is probably the pick of the bunch, because the 88bhp 1.0-litre triple isn’t much more economical, but can feel gutless. There’s also a more economical 1.5-litre diesel engine (the only choice if you want four-wheel drive), but it’s not as powerful as the 130 and is more expensive to buy.

The Duster has MacPherson struts up front and an independent multi-link rear set-up. The ride can get quite busy on less smooth roads, struggling to settle, but it rarely crashes over bigger imperfections.

Two factors make it surprisingly fun to drive along a twisty road, despite this not being a necessary part of the repertoire of a car like this. Firstly, there’s a satisfying manual gearshift. And secondly, the Dacia tips the scales at less than 1,300kg.

So it’s quite an easy and enjoyable car to hustle around, even if the steering is a touch light and doesn’t offer much in the way of feedback. Grip levels are acceptable, but there is quite a bit of body roll.

Despite sitting on what is quite an old platform now, the Dacia continues to score well on practicality. The livened-up cabin feels spacious, with a high roof and adequate legroom in the back. The boot space of 445 litres (1,623 with the rear seats folded) is commendable given the car’s compact size.

A lot of the plastics – particularly those used for the main part of the dash and the door cards – feel cheap, but this is made up for by the infotainment, which is impressive considering the Duster’s low price. In the Extreme SE, plus the Comfort and Prestige-trimmed cars, it is a reasonably responsive eight-inch touchscreen and includes Android Auto and Apple CarPlay connectivity.

Each version of the Extreme SE comes in at a £300 premium over its Prestige equivalent, which seems like an acceptable hike for what you’re getting in return, and once the PCP deals are out, the difference on a monthly payment is likely to be negligible. It’s worth pointing out that Urban Grey paint is £695; the only ‘free’ finish is Glacier White, although the same can be said for all Duster trim levels.