The revised Audi A8 remains as sumptuous as ever, and remains a subtle and understated method of moving around in wonderful comfort. Thanks to a larger battery, this plug-in hybrid version makes more sense than ever, too. However, the problem for the A8 is that some rivals manage to feel even more cosseting and even more special – and with prices that can easily go north of £100,000, perfection isn’t unreasonable to demand.

Few things in life will make you feel quite as special as sitting in the back of an Audi A8 L 60 TFSI e.

From the back of this £90,000, 2.4-tonne luxury limousine, you can adjust the four-zone climate control on the dedicated central touchscreen, which ejects out of the huge central armrest to operate as a remote control. Adjustable leather armchairs (available in brown for 2022 if you prefer) can recline to near-business class flight levels of horizontal, while electric blinds can close to hide the outside world.

Opt for the Relaxation seat, and it gets better still. A warmed and massaging footrest folds out from the back of the front passenger chair, while the seat itself has 18 pneumatic cushions to relax muscles in your back you weren’t even aware were there. An ideal spot, then, to enjoy your favourite streamed show on the new-for-’22 10.1-inch HD displays mounted on the back of each of the front seats.

The new screens are just part of a range of updates to an A8 lineup that has received a mid-life facelift to increase its appeal from the original version launched in 2017. From the outside, the most notable changes are at the front. The trademark singleframe grille has grown wider at its base and there are new chrome inserts replacing the old horizontal bars. The side intakes have been reprofiled too.

The headlights have also received a design tweak, but more significant is the tech they now hold. The LED matrix units each feature roughly 1.3 million micromirrors that can aim and adjust the light beam incredibly precisely, to the point of highlighting a driver’s lane on a motorway. In practice, they’re fantastic; you can see the beams of light constantly adjusting at night as you move along the road, in order to give the maximum level of coverage without blinding other road users. The rear lighting graphics are dazzling, though; the OLED tech is able to play animations as the car powers on or off.

The mechanical setup of the body is much the same as before, with a predominantly aluminium body (backed up by a mix of high strength steel, magnesium and carbon fibre reinforced polymer for the rest) is held up by air springs and a progressive steering system. Four-wheel steering is also available, and we’d recommend it – it makes this 5.3-metre long limo as easy to turn in the road as an A4. 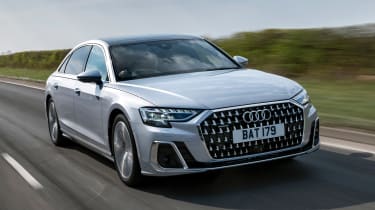 But while the cabin comfort feels exceptional, against its rivals the driving dynamics are merely okay. The ride comfort is very good overall, if not exceptional. At high speed it’s superb, but around town, some shorter, sharper bumps can make it feel a little harsh. A BMW 7 Series has an edge here. Likewise wind and road noise, which are, in isolation, very well suppressed, but rivals are more peaceful still.

Few will hustle an A8 along a twisty road, but it gets the job done without any nasty surprises. A Bentley Flying Spur is more engaging while feeling at least as relaxing, though.

There are four engines to choose from, including two 3.0-litre V6 units (one petrol and one diesel) plus a 4.0-litre V8 in the S8. Here we’ve got the likely choice of the exec who doesn’t want to waste their salary on excessive Benefit in Kind deductions; that’s because the 60 TFSI e is a plug-in hybrid that boasts official CO2 emissions of just 43g/km.

The battery has grown compared to its predecessor to 17.9kWh (14.4kWh of which is usable) which results in a much greater electric range. We found that a fully charged battery on a 14-degree day promised an EV-only distance of 35 miles. Charging can be completed at a rate of up to 7.4kW.

The electric drivetrain is almost completely silent, though there’s a subtle shunt as the car shifts through the eight ratios in the automatic gearbox. Performance from the 134bhp motor is adequate around town, but accessing the full 456bhp takes help from the 3.0-litre turbocharged V6 engine.

Performance feels suitably strong with electric and petrol elements working together; there’s no drama, just a smooth but constant surge that shoves the A8 forward at a hot hatchback rate. The noise of the V6 is quite tuneful without being intrusive.

With many journeys covered in town, there’s the potential for that petrol unit to only be used sparingly. Officially, the 60 TFSI e achieves 148.7mpg – a figure that can vary wildly based on individual use cases, but one which isn’t impossible with a high proportion of short or urban journeys covered.

The only real compromise that plug-in hybrid tech brings for a car like this is practicality. With the battery pack located towards the back of the car, the boot volume has taken a hit; the 390-litre volume is down from 505 litres on non-hybrid versions.