Since its creation in 1988, Wesimann has built a reputation for making retro-inspired sports cars, usually fitted with engines from BMW’s M division. The change to a pure-electric powertrain is a significant step, but on paper Weismann appears to have kept its performance credentials intact.

A 92kWh battery (83kWh usable capacity) powers two mid-rear mounted electric motors, resulting in 680bhp and 1100Nm of torque – making the Thunderball Weismann’s most powerful road car yet. Power is sent to the rear wheels only and Weismann claims a 0-62mph time of 2.9 seconds.

Despite extensive use of carbon fibre in its body, the addition of a pure-electric powertrain means the Thunderball is heavier than its petrol-powered predecessors at 1,700kg. Beneath its retro bodywork there are some modern touches, but an 800V system allows for rapid charging.

The Thunderball’s range is targeting 310 miles, says Weismann, which would be good enough to rival more conventional electric cars such as the Ford Mustang Mach-E and Ioniq 5. There’s also a regenerative braking system to help conserve that range. 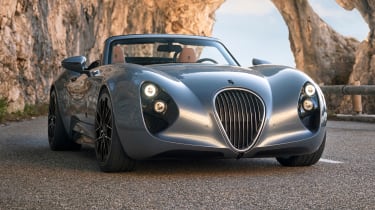 Like its previous cars, Weismann has given the Thunderball plenty of design touches inspired by classic British sports cars. At the front of its elongated clamshell bonnet sits a grille reminiscent of the Jaguar XK120’s, flanked by large headlight cut outs similar to the old MF4.

At the back we see twin rounded rear lights just like previous Weismanns with air ducts beneath them, there’s also a moulded rear spoiler sitting above a large rear diffuser to further emphasise the Thunderball’s performance.

There’s a mix of retro and modern design touches inside, with seven analogue driver-focused dials and leather door straps coupled with a central touchscreen, a carbon fibre centre console and carbon-backed bucket seats.

The Thunderball will be produced at Weismann’s ‘Gecko’ factory in Dulmen, Germany and is available to order now with a starting price of £253,035.

Now check out the latest on the Tesla Roadster here…