Porsche has decided to celebrate 911s from the 1960s and early 1970s – which has resulted in a new 911 Sport Classic special edition model.

In terms of design there’s plenty of influence from past Porsches in this new Sport Classic. Sport Grey metallic paint is an exclusive colour for the Sport Classic but the car is also available in solid Black, Agate Grey Metallic or Gentian Blue Metallic.

The graphics on the side are a no-cost option and customers can choose any number between 0 and 99 to enhance the retro racer aesthetic. The twin stripe travels from the bonnet to the spoiler, just as it did on the Sport Classic of 2009.

One of the standout exterior features is the reintroduction of the ducktail spoiler. It’s a reference to the iconic 911 RS 2.7 from 1972 and is made out of carbon-fibre reinforced plastic to help save weight.

Another is the Fuchs-style wheels. They’re 20- and 21-inch centre-lock wheels and they pay homage to the 911 S of 1967 – the first 911 to sport this now iconic wheel design. Elsewhere we see gold-coloured ‘Porsche Exclusive Manufaktur’ badges and on the grille of the engine cover there’s a ‘Porsche Heritage’ badge just like the Targa 4S Heritage Design Edition. 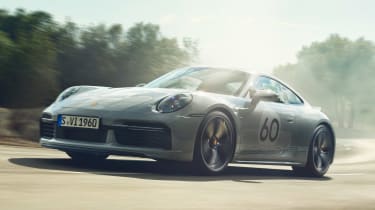 The interior also receives a multitude of throwback touches such as the iconic pepita houndstooth pattern on the door panels and seat centres first found as an option the 911 of 1965.

The instrument cluster has also been lightly tweaked with a Sport Classic logo and the green digits also seen on the legendary Porsche 356. A gold-coloured limited-edition badge with the personalised vehicle number sits above the glove compartment.

The new Sport Classic isn’t merely a visual tribute of classic 911s. It gets a 3.7-litre, twin-turbo flat-six engine pumping out 542bhp to the rear-wheels only. While Porsche says it’s based on the 573bhp all-wheel-drive Turbo, the Sport Classic doesn’t utilise the same air ducts found in that car’s rear side panels.

Porsche has given the Sport Classic a seven-speed manual gearbox, making it the most powerful manual 911 available today. A manual ‘box and less power than the Turbo is likely to mean it won’t match that car’s 2.7 second 0-62mph time – although extra weight savings from the carbon-fibre reinforced bonnet and roof should help it close the gap. A standard sports exhaust system has been retained but it should feel louder from inside the cabin because Porsche has taken out some sound insulation.

The suspension, Porsche Active Suspension Management (PASM), is the same as you’d find on the current Turbo and GTS, albeit with slight axle load tweaks due to the removal of the four-wheel drive system. Ceramic brakes come as standard for the Sport Classic.

Limited to 1,250 units, the new Sport Classic is available to order now from £209,540. First deliveries across European Porsche dealerships will start from July 2022.

Check out the latest on the Porsche 911 GT3 RS here…