Ford’s third attempt at the Kuga is easily the best yet. The latest iteration of its family SUV blends great driving dynamics with useful on-board tech, good safety kit and plenty of practicality.

The Kuga doesn’t offer quite as much space as its close rivals, but the overall package remains compelling. With efficient hybrid and plug-in hybrid models available and competitive prices across the range, the Kuga offers exceptional value for keen drivers who need a little more room for the family.

A quick look at the Ford Kuga family tree reveals the first-generation SUV, launched in 2008, was little more than a high-riding Ford Focus. This was a good thing, though, and meant customers were treated to hatchback-style handling, while benefiting from the extra space and practicality of the larger five-door family car.

Growing a little rounder in its middle age and, with increasing competition from the likes of the Peugeot 3008, Renault Kadjar and Kia Sportage, the Kuga struggled to make its mark. Uninspiring looks, tired tech and the loss of its sharp driving dynamics did nothing to help its cause.

Ford’s latest crack at the Kuga is just right. The manufacturer has concentrated its attention in all the key areas, providing the Kuga with eye-catching good looks, decent levels of standard kit, an efficient range of engines and solid safety credentials. It drives rather well, too.

The third-generation Kuga is based on Ford’s C2 platform, so it shares its underpinnings with the Focus hatchback. Ride and handling are back to being standout attributes for the Kuga, and there’s more driving fun to be had compared to rivals such as the Toyota RAV4, Honda CR-V and Hyundai Tucson.

The VW group offers up the smart, but rather bland trio of the Tiguan, Skoda Karoq and SEAT Ateca, while there’s also the stylish Mazda CX-5, or the ever-popular Nissan Qashqai to consider. 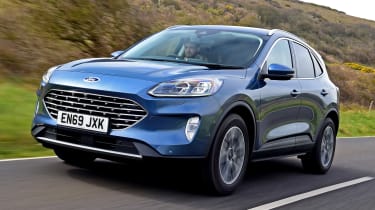 Ford has revised the Kuga’s engine range, discontinuing diesel power and now offering a 1.5 EcoBoost petrol unit with 148bhp, as well as a 222bhp 2.5-litre petrol plug-in hybrid and a 187bhp full-hybrid model.

The 1.5 Ecoboost engine is paired solely with a six-speed manual transmission, while the hybrid and plug-in hybrid models use a CVT auto ‘box.

If you can afford it, then the third generation Ford Kuga offers the most complete package as a family SUV. It’s been on sale since 2019, so second-hand examples have had enough time to find their way onto dealer forecourts. Buyers may be able to land a Mk2 model for far less money, but will need to be prepared for the crossover styling, average load space and cheap feeling interior, while first-generation cars, although a little older, were offered solely with the well-equipped Zetec and Titanium trim levels.

You won’t find any efficient plug-in hybrid tech with a second-generation Ford Kuga, just straightforward petrol and diesel units. Compared to rivals such as the SEAT Ateca, the Mk2  Kuga was average to drive, with most models offering a front-wheel-drive set-up.

A variety of different trim levels were on offer, from entry Zetec through to Titanium, ST-Line and luxury Vignale versions, while a facelift in 2016 saw styling tweaks to the exterior, a redesigned dash, revised on-board tech and a new 119bhp diesel engine. Read our full Mk2 Ford Kuga buyer’s guide here…

For an alternative review of the Ford Kuga, visit our sister site carbuyer.co.uk…