While autonomous cars may still seem like science-fiction for some, Nissan is confident that its cars will be able to drive fully autonomously by the year 2030.

Nissan’s new ‘Ground Truth Perception’ technology utilises a mix of radar, camera and lidar devices to map out a car’s surrounding area, providing the vehicle with the information to detect potential collisions and avoid them.

The brand has shown a Skyline saloon car fitted with its latest autonomous technology avoiding pedestrians at short notice, a rogue oncoming wheel, erratic traffic and collisions – albeit all at a controlled testing venue.

Takao Asami, Nissan senior vice president, leading global research and development, said “by the mid-2020s our autonomous technology should be 100% safe and we could see it reach the public road by 2030.”

Nissan clarified that not all of its future vehicles will offer fully autonomous driving technology by 2030 and the firm said that the tech could feature as an optional extra on some models. 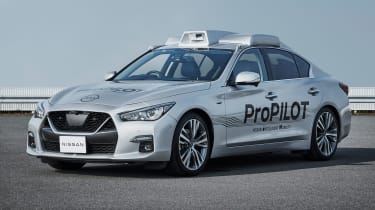 Asami conceded that the cost of buying an autonomous car remains expensive, highlighting “the cost of lidar is expensive, but if other manufacturers start developing this kind of technology, then we’re more likely to see a reduction in the costs”.

Legislation surrounding autonomous cars and automated driving is still a stumbling block in some markets, but Asami thinks safety regulators could help with the take-up of autonomous vehicles. He said, “In Europe we could see it incentivised through NCAP, for example”.

Asami also said that “some collisions are unavoidable, so we’re working on strategies for damage limitation in this case. Our cars will avoid accidents as much as possible for the safety of the car’s inhabitants and those outside the car.”

There’s also scope for Nissan’s autonomous cars to have connectivity with other vehicles including cars from other manufacturers, as well as the firm’s data gathering services. “There is good sense to exchange data”, said Asami, “Nissan cannot work alone on this, we need to work with other brands but it’s something we’re definitely trying to do.”

Nissan is aiming for its technology to be finished in the mid-2020s and to be available on virtually every new model by 2030. This means its autonomous tech is likely to feature solely on electric cars here in the UK, although Nissan has stated that it’ll remain applicable for combustion-engined cars too.

Now check out the latest on Nissan’s upcoming electric cars