The new Range Rover Sport is set for its full reveal imminently and these new spy shots suggest the even sportier SVR version could follow soon.

While the car is still under heavy camouflage, these shots taken in Germany by Instagram user ro.casp show the new Sport SVR will get plenty of visual tweaks including a new roof spoiler, quad exhausts and a unique diffuser. A more aggressive front grille will also be added to flow extra air to the SVR’s more powerful engine.

The Range Rover Sport first got a hot SVR version during the facelift of the second-generation model in 2015 – powered by a 550bhp 5.0-litre Supercharged V8. We’re likely to see even more performance in the latest Sport SVR, the flagship utilising the same 4.4-litre twin-turbocharged V8 found in the BMW X5 M Competition. 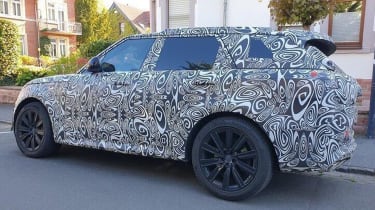 That engine is available in the latest full-size Range Rover with 523bhp, but the SVR is more likely to match the X5 M’s 616bhp output. We can also expect the new SVR to use the same eight-speed ZF automatic transmission found in the X5 M and while we can’t get any clue from these spy shots, uprated suspension and larger brakes are a certainty.

The new Sport will be available with a pure-electric powertrain and given the instantaneous acceleration afforded by electric cars, it’s possible the new SVR won’t be the fastest model within the Range Rover Sport lineup from 0 to 62mph. The new model could well top the old car’s 4.5 second 0-62mph time and its 176mph top speed, however.

Given that the new Sport is due to be revealed on 10 May, the SVR’s unveiling can’t be too far away. Prices are likely to start from well over £100,000.

Now check out our review on the new Range Rover here…