BMW is set to revolutionise its smallest SUV, the X1, with a new third-generation model, and we’ve spied it testing at the Nurburgring.

The German firm’s recent teaser of its iX1 confirmed the next X1 will be joined by an all-electric SUV in a similar vein to BMW’s iX3 and X3 SUV range. The X1 will move to an updated version of the current car’s UKL2 platform, allowing BMW to offer petrol, diesel, plug-in hybrid and fully electric versions of its Audi Q3 rival.

These new spies show the car with less camouflage than before. It’s likely this mule is an M Sport model because the angular front bumper is similar to that on the new 2 Series Coupe M Sport. BMW has opted for a kidney grille less imposing than that of the 4 Series or new 7 Series, and the headlights are not too dissimilar from the current X1’s.

At the side we see a new split five-spoke alloy wheel design and at the rear there’s a roof spoiler and traditional BMW ‘L’ shaped signature rear light design. There’s no aggressive diffuser on the rear bumper, but there are a couple of inserts where exhaust tips may appear later in development.

A slight growth spurt will give the car more presence, with a boxier, taller and more imposing profile.

The X1 will make its debut in the second half of this year and go on sale in Britain before 2022 is out. The range’s starting price is set to rise slightly from the £30,555 of the current model.

The current X1 is now BMW’s oldest car in the firm’s entire passenger-car line-up. As such, there’s plenty to update, while keeping the concept of the X1 relatively unchanged. The new car will still be a compact premium SUV that’s marketed as a more conventional and practical alternative to the sportier-looking X2, which is tipped to be renewed in 2023. 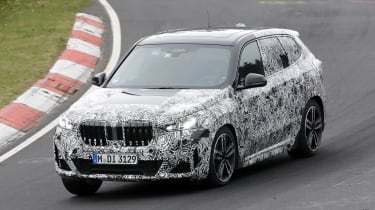 While the exterior seems to be an evolution of the current car’s, the interior in particular will move on quite significantly. The next X1 will adopt BMW’s latest iDrive 8 system and ‘curved display’ infotainment suite. It won’t get the larger screens found on the new 7 Series, but it will get a 10.25-inch digital instrument panel blended with a 10.7-inch central display. BMW has said it’ll reserve its rotary dial input for its larger cars, so expect a touchscreen-only user interface.

Underpinning the new X1 will be the new FAAR platform, which is used by the new 2 Series Active Tourer and will support the next MINI Countryman.

Turbocharged three and four-cylinder petrol power with mild-hybrid assistance will make up the bulk of the combustion engine range, driving the front wheels via an eight-speed automatic gearbox. The UK line-up is likely to begin with the X1 sDrive20i, using a 168bhp 48-volt-assisted three-cylinder engine, joined by a four-cylinder 48-volt option with 215bhp.

Contrary to its dwindling importance and popularity, diesel power will be retained in the X1, more than likely using the latest iteration of the brand’s 2.0-litre four-cylinder turbocharged engine from the new 2 Series Active Tourer. It develops 148bhp and should return an mpg figure in the high 50s.

The two extremes of the X1 line-up will be represented by a high-performance model developed with input from BMW’s M division, and an all-electric model, called iX1, that will rival the likes of the Mercedes EQA and the Volvo XC40 Recharge.

Spy shots of the anticipated X1 M35i hint at sportier exterior styling with a wider track, lower suspension and a quad exhaust set-up. The model will take its running gear from the hottest version of the 1 Series hatchback, the M135i. With a turbocharged four-cylinder engine developing at least 302bhp and xDrive all-wheel drive fitted as standard, a sub-five-second 0-62mph dash could well be within reach.

Less easy to predict is the composition of the all-electric iX1 model’s powertrain, because we’ve yet to see a compact electric BMW model using the FAAR platform in production form. However, information from the company about the abilities of the FAAR platform has previously suggested a targeted maximum range of 280 miles thanks to a 60kWh underfloor battery – more than enough to ensure that the iX1 will be competitive with its rivals.