In a shadowy online teaser video, Ford has given us our best look yet at a new all-electric van which is likely to be the new Tourneo Custom EV.

Ford and Volkswagen’s joint-venture agreement in 2019 will mean the new electric Custom van will utilise the same MEB underpinnings found in the new Volkswagen ID.Buzz Cargo. It’s unclear however how much VW technology will be copied over into the Ford and this new teaser video highlights plenty of design changes from the retro-themed ID.Buzz.

The headlight design has been seen before in a previous teaser from Ford which depicted an all-electric Tourneo Custom. It features a full-width lightbar coupled with a small ‘e’ badge. The overall frontal area is much less bluff than that of the ID.Buzz as well. At the rear the Ford features a vertical rear light rather than horizontal design of its German cousin.

It’s likely that this electric Tourneo Custom will share the same 77kWh battery as the ID.Buzz and while we’re yet to see confirmation of the van’s range from VW, expect in the region of around 250 miles. 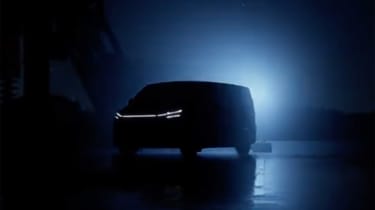 The new Tourneo Custom EV will be one of five new electric Ford vans brought to the UK by 2024, with next year’s all-new Transit Custom spearheading the lineup, together with the E-Transit, Transit Courier, Tourneo Courier.

In terms of tech, we can expect an enhanced version of the FordPass Pro and Ford Fleet Management software found on the current Transit. We should also see the latest iteration of Ford’s SYNC 4 infotainment system.

While we don’t know the launch date for Ford’s new electric van, the brand has said it’ll be revealed on 9 May.