Now positioned as a solely pure-electric car manufacturer under joint Daimler-Geely ownership, Smart is set to extend its range with a coupe SUV.

It’s been spotted on the streets of China by Instagram user Cochespias and while it remains heavily camouflaged, we can see some key details already.

The Smart SUV Coupe will likely be pitched as a rival to the Volvo C40 Recharge and the Genesis GV60. This test mule sports some Brabus seats and red callipers, though, suggesting it could be a more performance-orientated version.

There’s also Smart badging on the centre of the five-spoke alloy wheels and the headlights are reminiscent of the new Smart #1 electric crossover’s design. The roof is much more raked than that car however and it slopes down at the rear in typical coupe SUV style. 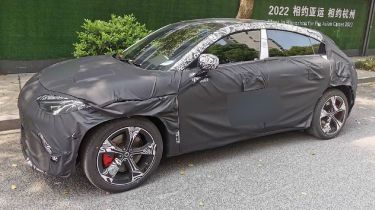 The Coupe SUV should sit on the same all-electric ‘SEA’ architecture as the new #1 EV. We expect it to also use the same ‘#’ numbered nomenclature, which will position its products chronologically rather than by size or sector.

The 66kWh battery found in the #1 could make its way over to this coupe SUV, but given the Brabus branding, we could see even more power than its 268bhp and 343Nm electric motor offers currently. If it’s more geared towards performance, then expect a range less than the 273 miles offered by the #1.

There’s no word on if this all-electric coupe SUV from Smart will come over to the UK but if it does get the green light, don’t expect it until at least 2023.

Check out the latest Smart news and reviews here