These new spy shots give us our best look yet at the upcoming Hyundai Ioniq 6, an all-electric family saloon pitched to rival the Tesla Model 3 and BMW i4.

While still heavily camouflaged, these new photos reveal the Ioniq 6 will stray from the design of the Prophecy Concept. The huge matrix LED rear light cluster of the concept is likely to be toned down and another rear light cluster will sit above it.

The camouflaged area above the light could conceal a spoiler like the concept, albeit a smaller one. Given the placement of the door handles on this prototype, there’s no chance of seeing the ‘suicide’ doors of the Prophecy Concept appearing on the Ioniq 6.

Those door handles are also likely to be flush with the body, just like on the Ioniq 5, to improve aerodynamics. There’s also a new design of diamond-cut 20-inch alloy wheel. 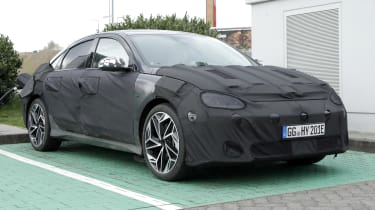 The overall design of the Ioniq 6 is much more aerodynamic compared to the angular Ioniq 5. Hyundai’s 800V E-GMP architecture will underpin the Ioniq 6 which will allow for the 77.4kWh battery pack found in the Kia EV6, rather than the 73kWh unit used for the Ioniq 5. This means we should see the Ioniq 6 surpass the Ioniq 5 with a 311-mile range.

A 301bhp setup will be reserved for the flagship model. Less expensive versions of the Ioniq 6 will also be available, featuring a smaller 58kWh battery pack and a single electric motor, making a starting price of £40,000 plausible.

Inside, the Ioniq 6 will take more inspiration from the Ioniq 5 than it does from the Prophecy concept, borrowing the former model’s dual-screen infotainment system. It will also come with a conventional centre console and a tunnel-like armrest running from the dashboard through the middle of the cabin.

Now check out the best electric cars on sale now…