The government has set out a series of proposed changes to the Highway Code which are intended to ensure the safe introduction of self-driving cars and other vehicles on UK roads.

The changes are designed to set out the responsibilities of human drivers, and the situations in which they must take back control, as the government claims future self-driving tech could help ease congestion, cut emissions and reduce the number of accidents.

The Highway Code changes are the result of a public consultation and if passed into law will make it clear that human drivers must at all times be ready to resume control in a timely way if prompted to by the car. For example, when approaching a motorway exit.

However, when the car is doing the work, changes to Highway Code rules mean drivers will be able to sit back and relax to their favourite movies, TV shows or YouTube videos – currently it’s illegal for cars to display screen content that is not driving-related.

You still won’t be allowed to use a mobile phone or other connected device that isn’t hands-free, though we’ve yet to see guidance on what other activities may be allowable – reading books or magazines isn’t mentioned specifically, for example. The new rules do confirm the current drink-drive rules will remain in place.

The government has set itself a deadline of 2025 to produce a full legal framework for autonomous or self-driving vehicles.

Transport Minister Trudy Harrison said: “This is a major milestone in our safe introduction of self-driving vehicles, which will revolutionise the way we travel, making our future journeys greener, safer and more reliable. 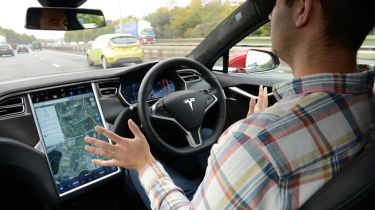 “This exciting technology is developing at pace right here in Great Britain and we’re ensuring we have strong foundations in place for drivers when it takes to our roads.

“In doing so, we can help improve travel for all while boosting economic growth across the nation and securing Britain’s place as a global science superpower.”

Government bean-counters reckon the development of self-driving technologies could create an industry supporting 38,000 highly-skilled jobs here in the UK, worth almost £42 billion by 2035.

When will self-driving cars arrive?

The first fully self-driving tech is likely to appear first on vehicles travelling slowly on motorways, for example in congestion. Existing ‘autonomous’ tech is legal for assistance only, meaning the driver always has to be in control.

Steve Gooding, director of the RAC Foundation, said: “The Highway Code has been updated a number of times in recent years to reflect the rapidly changing transport world we live in, and these latest additions will help us all understand what we must and must not do as we move forward to an environment where cars drive themselves.”

Mike Hawes, SMMT Chief Executive, said: “Amending the Highway Code to reflect the pace of technological change will help clarify what motorists can and can’t do when a self-driving feature is engaged, so promoting its safe use. The technology could be available in the UK later this year and, with the right regulations in place, consumers are set to benefit from safer, more efficient journeys while the UK will strengthen its position as a global leader in the deployment of self-driving technology.”