A new iteration of the Land Rover Defender V8 has been spotted testing at the Nurburgring and there’s plenty to suggest it could be the most hardcore and performance-focused version we’ve seen yet.

While this Defender 110 development car remains lightly camouflaged, we can clearly see the quad-exhaust tips found on the Defender V8. There are also flared wheelarches – which are needed because this test car sports some chunky BF Goodrich all-terrain tyres on a new alloy wheel design. The mystery Defender is also riding significantly higher than the standard car, also suggesting a more off-road biassed set up.

The standard Defender V8 produces 518bhp an 625Nm from a supercharged 5.0-litre V8 and its likely that we’ll see the same figures from this new model. Along with the off-road set up, the new Defender would be a close rival to next year’s Mercedes-Benz G-Class 4x4x2. 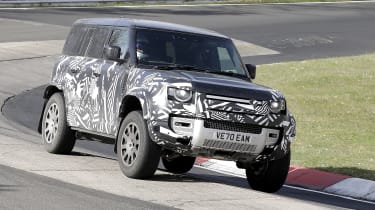 The Defender’s predecessor had plenty of beefier versions throughout its lifetime, such as the SVX from 2008, and it’s possible that Jaguar Land Rover’s Special Vehicle Operations department has been tasked with working on this new range-topper. Land Rover could also be making use of Bowler’s extensive off-road knowledge, given the recent partnership between the two brands.

With the visual upgrades and the V8 engine, this new model should cost well over the £101,000 price tag for the Defender 110 V8. Don’t expect it to be released until at least next year however.

Check out the latest Land Rover news and reviews here…