Lexus was a pioneer of hybrid powertrains among the premium brands, and 96 per cent of the firm’s European sales are now electrified in some form. However, now it’s time for the brand to push into fully-electric cars, and this is the first Lexus EV to sit on a bespoke electric platform: the RZ 450e.

The new creation is a family sized SUV that will sit somewhere between the NX and RX in scale – while offering cabin space much closer to the latter. It makes use of the same e-TNGA architecture as Toyota’s bZ4X SUV; indeed, both cars have the same 2,580mm wheelbase. But Lexus claims that a key engineering difference will make driving its EV a different experience from its cousin.

The car is being launched with four-wheel drive only, and the system, called Direct4, uses the motors on each axle to balance the traction of all four wheels and improve stability in corners. It takes data from sensors on everything from vehicle speed to G-force and steering angle, and then adjusts the front/rear torque split; Lexus claims the system can switch from front to rear to four-wheel drive in milliseconds, much faster than any mechanical set-up.

The RZ 450e is also introducing One Motion Grip, although this feature is set to be offered on the bZ4X in due course. In effect, it’s a steer-by-wire system that removes the physical connection between the steering wheel and the front wheels. Likely to be offered as an option, One Motion Grip delivers variable steering ratios designed to make it easier to manoeuvre the car; at low speeds, for example, moving from lock to lock only takes 150 degrees of movement, removing the need for hand-over-hand turns.

Lexus says that One Motion Grip helps to improve rolling refinement by removing “all unnecessary feedback” through the steering wheel – although the system will still try to replicate some of the normal sensation of the front tyres by monitoring levels of friction and then providing force feedback, in roughly the same manner as a computer gaming wheel.

The system also comes with a futuristic-looking yoke instead of a conventional steering wheel – and it brings a slightly redesigned dashboard that allows the instrument panel to be repositioned and maximise the improved visibility offered by the new set-up. Lexus claims the yoke also makes it easier to climb in and out of the RZ 450e’s driving seat. 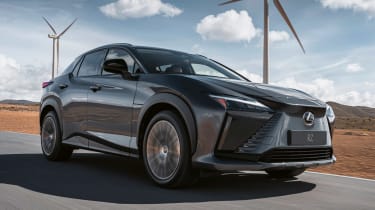 The firm’s European boss Spiros Fotinos told us that while it is possible that other variants could be added to the line-up, it looks unlikely. “A one-motor option is something we’d look at,” he said, “but the only reason you’ll do that is to offer a bit more range. And we’d need to weigh up the benefits there compared with the trade-off on driving feeling and sensation. If we’re going to turn it into something completely different, I don’t think that’s something we’d really do.”

The RZ 450e’s styling might divide opinion. It takes an evolution of Lexus’s spindle grille and extends its effect up through the central part of the bonnet through a colour that can also be installed on the roof. There’s particularly complex surfacing along the flanks – presumably in the name of aerodynamic efficiency – including a notable extra crease that kicks up near the C-pillar. Lexus says the cabin should offer passenger space comparable with that of a car from the class above, and while a boot capacity has yet to be certified, it’s expected to be around 500 litres.

Inside, the dashboard is dominated by Lexus’s latest infotainment system – as introduced on the latest generation of NX. It incorporates a 14-inch touchscreen display offering built-in navigation alongside Android Auto and Apple CarPlay smartphone connectivity. The accompanying phone app will also allow owners to pre-condition the cabin, check on the vehicle’s location and get it to flash the hazard lights for assistance locating the car in a busy car park.

Other novel features in the cabin include a powered dimmable panoramic roof that can easily and quickly switch from transparent to opaque. It’s also coated to reflect infra-red radiation and reduce heat build-up on sunny days, while keeping in warmth in colder conditions.

The car can also be fitted with radiant heaters at knee level in the front cabin. They come as part of a pack with heated seats and a heated steering wheel, and they cut the amount of time that it takes the front passengers to feel warmer. Lexus claims that this speedier process also saves energy by reducing the load on the air conditioning system.

The RZ 450e is available to order now, although the first cars aren’t likely to land on customers’ driveways until late summer at the earliest. Lexus is targeting around 6,000 sales for the vehicle in 2023 across Europe.