Volvo has anmounced it is investing in StoreDot, an Israeli company developing fast-charging battery technology for electric cars.

StoreDot has previously said it is working on technology that could result in batteries that can charge up to 99 miles of pure electric range in five minutes. The partnership could mean StoreDot’s technology could hit the public roads in Polestar and Volvo models by 2024.

Head of Volvo Cars Tech Fund, Alexander Petrofski, said “our investment in StoreDot perfectly fits that mindset, and their commitment to electrification and carbon-free mobility matches our own. We’re excited to make this a successful collaboration for both parties and work towards bringing this groundbreaking technology to the market.” 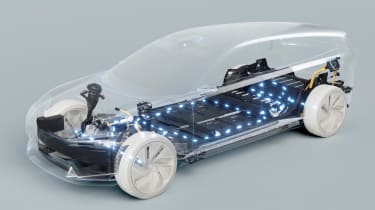 StoreDot’s charging claim would make it the fastest charging battery in a car to date. StoreDot says that it has successfully produced 1,000 cells and mounted them in devices such as mobile phones, drones and a pure-electric moped. The five-minute recharge time of the scooter was also showcased in 2019 with a live demonstration.

To make the technology work in an electric car would require much higher-powered vehicle chargers than those currently in use today. However, StoreDot is yet to announce what output these new chargers would require to charge its new battery effectively.

Now click here for our review of the new, pure-electric Volvo C40 Recharge