Confirmed in a presentation to attendees at the UBS Paris Electric Car Day, a slide within the presentation referred to ‘enhancements’ that are coming for the MEB platform, more than likely due to coincide with the release of the firm’s next ID. badged model in 2023.

A redesigned version of the MEB will support a battery and motor system capable of delivering 435 miles on a single charge, while the maximum recharge rate of the system will be upped from 150kW to 200kW.

Similarly, the maximum performance envelope of the platform will be increased beyond the standards set today by the likes of the ID.4 GTX, which uses a dual-motor electric powertrain producing 295bhp. That car does 0-62mph in 6.3 seconds, but the benchmark sprint will be reduced to 5.5 seconds for cars using the updated MEB system. 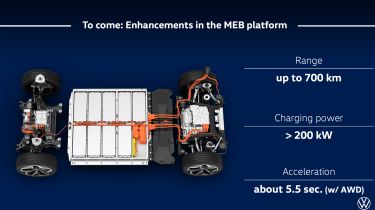 The range and performance aspects of the enhanced MEB offering will likely be as a result of new componentry and hardware, such as larger, denser battery packs beyond the 77kWh maximum currently available. Similarly, the extra performance will be achieved through the use of more powerful electric motor systems. However, the increased charging rate could be as a result of software refinements and optimisation.

It’s all but certain that the first car to use the enhanced MEB will be the production version of the ID. Vizzion, due in 2023. Volkswagen confirmed earlier in the year that a new concept of this vehicle, called ID. Aero, would make its debut at the now cancelled Beijing Motor Show, touting a range of up to 435 miles.

The technical improvements planned for the MEB platform will likely feed into facelifted versions of the ID.3 and ID.4, due around 2024, before being incorporated into the VW Group’s next-generation SSP platform, which will be introduced in 2026.