Ferrari has lifted the lid on a new convertible version of its hybrid powered 296 GTB supercar, called the 296 GTS.

Just like the 812 GTS, SF90 Spider and F8 Tributo Spider, the new 296 GTS features a retractable hardtop, which stows away in front of the car’s turbocharged V6 plug-in hybrid powertrain. Ferrari says the roof takes 14 seconds to go down or up and can be done at speeds of up to 28mph.

As for the rest of the car, the GTS, a two-seater berlinetta spider, as Ferrari calls it, looks identical to the GTB coupe. The 250 LM inspired design is still retained in the side intakes, vertical rear window and surrounding body panel. The flying buttresses and connecting ‘aero bridge’ also remain in place. At the front, the slim headlights and low, wide grille accentuate the car’s width and the rear of the GTS features the same central exhaust system and huge diffuser.

Discounting the Dino Spyder 246, the new 296 GTS is the first true road-going Ferrari V6 convertible to come out of Maranello. The engine is the same 3.0-litre twin-turbocharged V6 plug-in hybrid powertrain as the Berlinetta, meaning the GTS offers 819bhp at 8,000rpm and 740Nm of torque.

That power is sent through an eight-speed dual-clutch transmission to the rear wheels only – unlike Ferrari’s other hybrid supercar – the four-wheel drive SF90. Despite this, the 0-62mph time remains unchanged over the coupe, at 2.9 seconds. Top speed is also the same at over 205mph.

Just like the GTB, the GTS gets an eManettino switch alongside the traditional steering-wheel mounted Manettino control, with four selectable positions. 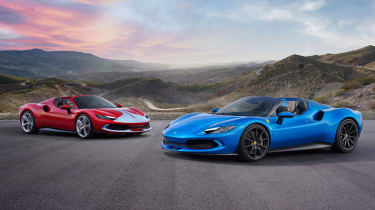 eDrive mode keeps the internal combustion out of the equation, providing pure electric drive to the rear wheels only, while Ferrari claims the 296 GTS is good for 15 miles of running in its EV mode, thanks to a 7.45kWh battery pack.

The default mode on ignition is Hybrid, which is set for maximum efficiency between the V6 engine and the battery and motor system. Switching to Performance means that the V6 engine is on hand to maintain a balance of high performance and battery management, for continued hybrid assistance and battery recharging. Qualify is the most extreme setting the 295 GTS can be driven in, and it provides maximum performance, although this comes with lower battery recharging.

Ferrari also offers the GTS with a Assetto Fiorano package, which includes lightweight features and aero modifications such as a redesigned front lip spoiler capable of producing 10kg of downforce. In total, with this additional package, the 296 GTS produces 360kg of downforce at 155mph.

However, unsurprisingly due its folding hard top, at 1,540kg the GTS weighs more than the coupe’s 1,470kg dry weight.

Aside from the addition of aerodynamic flaps integrated into the rear trim structure to reduce buffeting, we see the same cabin as the GTB. So that means an updated infotainment from the SF90 and Roma and an extra passenger-side display featuring information such as engine revs, speed and the current gear.

There’s no word on pricing yet, but a close rival to the 296 GTS is the McLaren 765LT Spider which starts from over £300,000 so expect to pay similar for the Ferrari when it goes on sale later this year.

Check out our review on the new Ferrari 296 GTB here…