Confirmed: Toyota Supra to get a manual gearbox

The Toyota GR Supra is going manual. Toyota has confirmed that the rumours are true and the wishes of enthusiast drivers are to be granted by revealing that a six-speed manual gearbox will indeed be offered in the Supra coupe.

The new transmission will slot into the range alongside the existing eight-speed torque converter automatic that’s been the sole gearbox option since the car launched in 2019. Details are thin on the ground at the moment with Toyota tweeting six gear cog emojis with a teaser image of a Supra’s rear end showing a new red ‘Supra’ badge.

An accompanying blog post on Toyota’s website features an image of a footwell containing a trio of pedals and also confirms that the new red badge will be used to signify the manual versions of the car. The blog post says that: “The Toyota GR Supra Manual Transmission has been engineered to offer enthusiasts something that is closer to the Gazoo Racing DNA and will enhance the driving experience.” 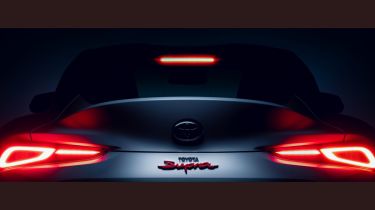 We already know that manual versions of the Toyota Supra were developed alongside the automatic cars so fans have long been clamouring for them to hit the market. What we don’t yet know is if the four- and six-cylinder BMW engines offered in the Supra will both get a manual option or if it will be restricted to a single engine.

It’s also unclear whether Toyota and its Gazoo Racing performance arm plan any chassis changes for the manual Supras that would further enhance the intended more engaging driving experience. The Supra’s BMW Z4 sister car is only available as an automatic.

There is still no word on the other big rumour surrounding the Toyota Supra, that of a possible Toyota Supra GRMN high performance variant. Such a car could up the power of the Supra’s range-topping 3.0-litre straight-six from the existing 340bhp and incorporate a more aggressive suspension and steering setup.