It is more of a chore plugging in a car for only 20-odd miles of electric range, especially if you lack the means to top up at home. This aside, the BMW 330e is a fantastically capable car and even more so now in Touring guise. It feels like an appropriate stepping stone or stop-gap to my next EV, something that will resonate with many new-car buyers.

Regular Auto Express readers will have followed my trials and tribulations as I’ve learned to live with electric cars. The journey started more than two years ago when I tried editor-in-chief Steve Fowler’s Jaguar I-Pace. Since then I’ve had three of my own EVs back-to-back, culminating recently with a top-spec Volkswagen ID.3.

EV ownership isn’t without its issues, but for me, the pros far outweigh the cons, especially if the car has a long-ish range of 200 miles or more. I’ve got another EV on the way, but needed a car for the interim.

So, when Auto Express deputy editor John McIlroy suggested I run the BMW 3 Series Touring seen here, I was a little sceptical. It’s a plug-in hybrid, but with an official electric range of just 32 miles, it’d be a break from the norm. Would running something with a petrol engine feel like a backwards step?

This is a fully loaded 330e xDrive M Sport Pro Edition Touring, and the last word in that lengthy nameplate is arguably the most important. Until recently, the 330e plug-in hybrid had only been available as a saloon; the estate joined the range much later.

That’s a good thing for me, because one of my biggest bugbears running the ID.3 was having to remove one of the wheels from my daughter’s buggy to fit it in the boot. No such issue with the BMW; the pram slides in with room to spare. Furthermore, there’s space under the floor for the charging cables. The hybrid retains the 3 Series Touring’s separate-opening rear screen, too, so you can chuck stuff in the boot without opening the main tailgate; a boon in tight spaces.

The 3 Series range starts in SE Pro trim, followed by Sport Pro and M Sport. Above them is our M Sport Pro Edition, which has much of the kit offered by the lesser models, including adaptive LED lights, leather trim and all the usual M Sport styling features, plus 19-inch Jet Black wheels, M Sport Brakes and M Adaptive Suspension.

Our car also has a few options fitted, bringing its list price to an eye-watering £56,765 at the time of writing. In that is the Technology Pack (£1,990), which includes a head-up display, Harman Kardon stereo, wireless phone charging, gesture control – still a gimmick! – and a WiFi hotspot. The Comfort Plus Pack (£1,950) adds a heated steering wheel and electric memory seats with lumbar support, among other things.

Parking Assistant Plus (£650) isn’t something I see myself using regularly, but I appreciate its value, especially in London, where you’re often slotting into small parking spaces. Of greater interest to me is the glass panoramic roof; a worthwhile £1,190 option, especially with the warmer months coming. It floods the cabin with light, too.

I’ve done 850 miles since taking delivery, a figure that would’ve been higher had my plans not been curbed by a positive Covid-19 test. I’ve plugged the car in whenever possible, but it’s hard to ignore that having a petrol engine to fall back on means I’m checking ZapMap for nearby chargepoints less often than with the ID.3.

Fuel economy for the 330e stands at 54.1mpg; not bad considering a big proportion have been high-speed motorway miles.

So far, I’ve found driving the car in its standard Hybrid mode prioritises electric running as long as the battery is topped up, only defaulting to the petrol engine once over a certain speed or the charge is depleted. Delving into the drive mode sub-menus has uncovered a second Hybrid ‘Eco Pro’ setting, which seems to better juggle the two power sources.

There’s less regenerative braking, but with this selected, the car cuts the engine at the earliest opportunity, seemingly increasing efficiency without any effort from the driver. So far, the computer tells me I’ve done 286 miles without using the engine.

Elsewhere, the 3 Series is everything I remember it to be: quiet, comfortable, and good to drive, plus spacious, solidly built and loaded with kit. I’ll try to answer the ‘backward step’ question in a later report. 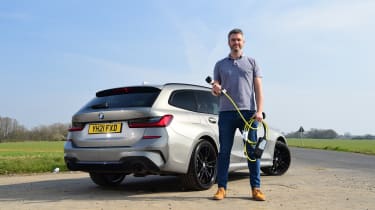