Volkswagen won’t set pulses racing with its new ID.4, but that’s not really the point of the German brand’s family-sized all-electric SUV. This second ID-badged model follows in the footsteps of the more compact ID.3 hatchback, offering more usable space and good levels of on-board tech, while a comfortable ride and practical range make it a car that’s easy to live with.

The ID.4 is not without fault, though. Take a look inside and you’ll notice some of the trim is a little cheaper looking than you might expect, and the touch-sensitive controls can be frustrating to use – particularly while on the move. With some rivals offering a more engaging drive, along with superior charging ability, the Volkswagen ID.4 is a good, but not class-leading, all-electric family car.

Volkswagen is facing up to an all-electric future with a steady roll out of zero-emission cars under its new, innovative ID sub-brand. The ID.3 hatchback was the first model to ride on the VW Group’s MEB platform, which was designed to help implement the company’s strategy of near 100 per cent EV sales by 2040.

The MEB architecture is already in use across other group subsidiaries, with the Audi Q4 e-tron, Skoda Enyaq and Cupra Born models all production ready, while Volkswagen’s own ID.5 coupe-SUV is also now on sale.

Following up on the launch of the battery-powered ID.3 is, the perhaps rather predictably named ID.4 family SUV has plenty of rivals to contend with. It goes up against the accomplished Ford Mustang Mach-E and the talented Korean duo of the Hyundai Ioniq 5 and Kia EV6, while the strength-in-depth of the growing EV market is such that there is further competition from the likes of the cheaper Kia e-Niro and Tesla Model 3 at the upper end of the market.

From launch, the ID.4 was offered with fixed equipment levels, with little flexibility to spec your car as you wanted. Volkswagen quickly saw that this rigid approach wouldn’t wash with buyers and there is now the option to choose a trim level and add extra kit.

There are six trims available, with the original entry-level City version replaced with the Life model, and Business and Tech levels now discontinued. Following Life comes Style and Family, with the luxury Max and sporty GTX and GTX Max at the upper end of the price list. A limited 1st Edition model was also available at launch, with upgrades over the Life trim being bigger 20-inch alloy wheels, a black roof and unique badging. 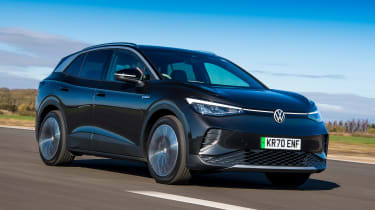 The ID.4 comes with either a 52kWh or 77kWh battery, with a single motor driving the rear wheels. Versions with the smaller battery are available with either 146bhp or 168bhp, badged as Pure and Pure Performance respectively, while the 77kWh setup features a Pro version that delivers slightly more power at 172bhp and increased range.

Buyers seeking extra performance will no doubt look to the bigger capacity battery and the 201bhp Pro Performance and 295bhp GTX variants.

The ID.4 range doesn’t benefit from the government plug-in car grant, with entry Life models starting from around £36,500, while you’ll need an extra £20,000 to secure a top-spec GTX Max car.

For an alternative review of the ID.4, visit our sister site drivingelectric.com…