It’s almost ten years since TVR chairman Les Edgar joined the iconic British manufacturer to head up its new era, but the project has been marred by delays and uncertainty around its new sports car – the Griffith. The problems can be attributed to a couple of factors: the Coronavirus is one, but another is the premises in which the new TVR Griffith will be built. TVR plans to produce it in Wales at a plant in the Ebbw Vale area, but the need to reconstruct the facility has delayed the launch.

Since the Welsh government owns a three per cent stake in TVR, with a complicated deal in place when it comes to ownership of property related to the project, there’s an incentive for the country to ensure the project comes to fruition to pay back its taxpayers.

And now, TVR has pledged to deliver its first cars toward the end of 2023, once the factory is completed. TVR is primed to recruit and train staff to produce the new sports car to reach this goal, and Edgar, alongside CEO Jim Berriman and operations director John Chasey, recently spoke to our sister title evo magazine to explain the current state of the project.

Speaking on the early Griffith prototype that hit show stands in 2017, Edgar asserted: “If we hadn’t done what we did, take a brave step and leapfrog a few stages you would normally go through before you produce a road-going thing that you can drive around a track and take up and down the road; had we not done that, we would be in a lot more of a state in terms of timing.”

According to TVR, building a fully working prototype of the upcoming sports car was key to giving customers, investors and stakeholders faith in the project. “We can jump in it and say: ‘We’ll bring the car to you’. You can hear it and see it and feel it and drive it. And I think that’s made a huge difference in terms of promoting it,” said the chairman.

“Especially if you speak to someone not in the industry. You can’t show them a mule car,” added Berriman, who helped bring the Land Rover Freelander and L322-generation Range Rover to production during a stint at Rover Group.

With a 5.0-litre V8 engine from Ford and a Gordon Murray derived iStream chassis, the Griffith has taken significantly less R&D than a bespoke, ground up vehicle in order to come to fruition. However, the key sticking point is actually building the car – the Ebbw Vale factory where it’ll be produced remains a work in progress, although the end is in sight according to the firm.

Edgar admits “It’s rarely a case of ‘they must be doing brilliantly because they’re not saying anything’. The key thing is everything takes longer, from deciding how to do the car with Gordon [Murray] to working with shareholders”.

The factory is being provided by the Welsh Assembly, but red tape around state funding has delayed its completion. What was initially a refurbishment of the facility became a longer rebuild which began in 2020, and strangled TVRs investment prospects, according to Edgar.

“We got into a bit of a chicken-and-egg scenario. We explained that our investment case would be more attractive if work was already underway with the factory, and it took more time to get agreement that work could start ahead of our next round of investment and recruiting staff.” The firm told evo that progress of the rebuild would see TVR gain access to the plant in the first quarter of 2022, but whether this has happened is unknown. 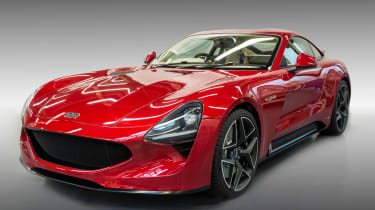 “We’re currently finalising how many prototypes we need,” says Berriman. “We need to drive one into a wall, but we’ll also need one for airbag and ABS testing, for example, that will need to be sent to a supplier – most likely Bosch – plus hot and cold weather test cars, powertrain, etc.”

For a small manufacturer, building a prototype for each of these tests is unviable, so each car will take on multiple development roles. The one-off show car took many hundreds of hours to create, but TVR must cut this down to tens of hours for customer cars.

Quality must be up to standard too, said classic TVR owner Edgar: “A car not starting or a door falling off is not acceptable. This was our starting point. It’s why we are using proven components rather than trying to reinvent the wheel by, say, designing and manufacturing our own switchgear. Yes, it will look and feel like a bespoke component, but the switch will be from an OEM supplier, which will have been tested beyond anything we can better.”

Alternative powertrains are also on the cards, with Edgar’s partnership with a lithium mining company opening doors to electrification, although hydrogen and fuel-cell solutions are also possible – so long as the final car is a TVR in character. A supercharged variant of the Griffith could be in the pipeline, too, and a mid-engined model isn’t out of the question.

The Griffith measures 4,314mm long, 1,850mm wide and 1,239mm tall, which makes roughly the same size as the Aston Martin V8 Vantage, but more compact than the Porsche 911 and Jaguar F-Type. Unlike any of its rivals, however, the Griffith is based around a carbon composite structure and weighs less than 1,250kg.

When the new Griffith does arrive, it’ll feature a naturally aspirated 5.0-litre V8 and a traditional six-speed manual gearbox, sourced from Ford. The unit develops 500bhp – enough for a 0–62mph time of less than four seconds and a top speed of 200mph. TVR is also aiming for a power-to-weight ratio of 400bhp per tonne.

As the engine will be located behind the front axle, TVR says it has been able to achieve a perfect 50:50 weight distribution with the Griffith. The sports car will also feature double wishbone suspension with adjustable coil-over dampers front and rear.

TVR has also employed some clever engineering to the way the car carves up the air. Instead of fitting the Griffith with an enormous rear wing or a massive front splitter, the firm will rely on ground effect aerodynamics – it features a completely flat floor which helps generate downforce at speed.

To further boost agility, larger and wider (20-inch) wheels have been fitted at the rear than those at the front (19-inch). TVR also claims that the Griffith uses “intelligent engineering over electronic driver aids,” although the car does feature ABS and traction control.

TVR boss, Les Edgar, describes the Griffith as a “British muscle car,” claiming it will offer “a level of sophistication, comfort and practicality never seen by the brand before.” The model also marks the return of a historic nameplate, which was first fixed to the rear of the brand’s first ever car back in 1964.

Are you excited to see the return of TVR? Let us know in the comments section below…