The Toyota Yaris Cross delivers where it matters most for buyers considering a supermini-based SUV. Of course, there’s the benefit of the higher-riding, slightly more practical setup, but the Yaris Cross is also competitively priced compared to its rivals, is easy to pilot around town and offers excellent real-world economy courtesy of its efficient hybrid system.

Yes, it feels like Toyota’s bean counters have had the last word in certain areas of the cabin, but it’s a good-looking little car offering a generous level of standard kit, while buyers on a budget needn’t worry as overall running costs should be pretty low, too.

Who’d have thought a few years ago that we’d see practical SUVs in the Aston Martin, Ferrari and Lotus lineups, or witness an all-electric Porsche receiving such a warm reception from driving enthusiasts?

Well, it’s all about diversification and keeping the cash coming in, and it’s not just high-end luxury and performance brands that are having to adapt. More mainstream manufacturers such as Toyota are also expanding their product portfolios, with the Japanese automaker beginning to introduce its range of new bZ-badged all-electric vehicles and eking out extra value from its existing model lines.

The Yaris Cross compact SUV is an example of the latter approach; based on the same TNGA platform as the regular Yaris, it sits alongside the standard supermini and the performance GR model on the Toyota price list. 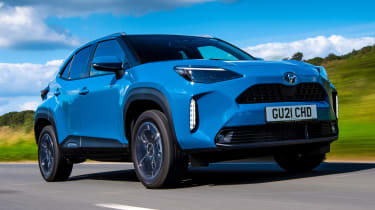 If you didn’t know you needed a slightly higher-riding supermini in your life, then chances are you’ll have at least noticed the increasing number of compact SUVs on the road; seen mostly in and around town, on shorter, urban commutes or competing in the hustle and bustle of the daily school run.

The Ford Puma, Renault Captur and SEAT Arona are popular crossover rivals, and take a similar approach to the Yaris Cross, being closely related to the Fiesta, Clio and Ibiza superminis, respectively. Other models to consider would be the Korean duo – the Hyundai Kona and the Kia Niro. All of these competitors offer some form of hybrid setup to help improve efficiency, with the exception of the Arona which uses petrol power only.

Buyers have a simple choice when it comes to the engine setup for the Yaris Cross; there’s just a single 1.5-litre, three-cylinder petrol hybrid unit, aligned with a small battery and electric motor to deliver a total of 114bhp. A CVT automatic transmission is standard throughout the range, with no manual gearbox available, although there is the option of front- or all-wheel-drive.

The entry-level Icon trim provides a decent level of kit, including 16-inch alloy wheels, adaptive cruise control, a reversing camera, smartphone connectivity and automatic air conditioning. Design, Excel, Dynamic and Premiere Edition trim-levels make up the rest of the range, with Toyota expecting the Design specification to be the most popular.

For an alternative review of the Toyota Yaris Cross, visit our sister site carbuyer.co.uk…