Just who will buy the Toyota Aygo X is difficult to define. It’s a strong city car that’s fun around town, civilised to drive on open roads and arrives with game-changing interior and driver assistance tech over the old Aygo. However, while its SUV-inspired makeover rings in the change, sales success will hinge on whether typically tight-fisted city car buyers are willing to fork out more for the Toyota’s aspirational image over well equipped, good value, but more conventional rivals.

The Toyota Aygo has served as a trusty first car for many Millennials. Since the model’s introduction in 2005 as Toyota’s entry-level model in Europe, alongside its former Peugeot 108 and Citroen C1 siblings, it’s forged a reputation as a no-frills, cheap, safe and reliable mode of transport perfect for those hitting the road for the first time. However, for the third-generation version of this city car stalwart, the Aygo – and its customer base, perhaps – has grown up.

It’s now called the Aygo X (pronounced Cross) and uses the Yaris supermini’s underpinnings, courtesy of Toyota’s GA-B platform. Although the Aygo X is still officially a city car, it’s now 3.7 metres long, while ride height increases by 11mm as part of an SUV-inspired transformation, and the driver’s seating position is 55mm higher than before.

We’ve previously driven a pre-production car, but this is our first encounter with the finished product, which is now on sale in the UK with first deliveries coming later in April.

The entirely new front end design is more imposing and SUV-like, with a taller nose flanked by LED headlights. Chunky black plastic cladding runs around the wheel arches, housing very un-city car-sized 18-inch wheels. The design is a little more evolutionary towards the rear of the car; it keeps the previous-generation model’s pop-out rear windows for the rear seat passengers, a bootlid made from a single pane of glass and similar vertical taillights. Even the Aygo badge is the same, save for the new ‘X’ suffix.

The exterior redesign reflects what you’ll discover inside the car. The new Aygo X is wider than the old Aygo hatchback, with a 90mm-longer wheelbase, yielding greater room up front, with more space for the driver and front passenger. The dashboard has been totally refreshed, with a design centred around a new touchscreen; a seven-inch screen is standard in the entry-level Pure grade model, while the range-topping Exclusive, as driven here, gets a nine-inch unit with Navigation, Android Auto and Apple CarPlay. 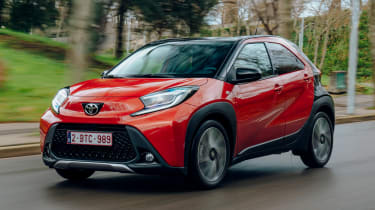 Extra space, dashboard redesign, steering wheel and infotainment aside, there’s still plenty that reminds you of Aygos of the past. Exposed metal in the body-colour lines the doors in place of interior trim, while there are no soft-touch plastics, to help keep costs down.

The two rear seat occupants don’t benefit from the longer wheelbase because legroom back here is still very much at a premium, even with shorter adults up front.

One area in which the Aygo X does grow, however, is in how it drives. The engine is familiar: it’s Toyota’s 1.0-litre three-cylinder petrol unit, developing just 71bhp and 93Nm. As before, progress is very slow, taking 14.9 seconds to hit 62mph, but it’s only overly thrummy if you really rev it hard. That aside, it’s a refined car when you eventually get it up to speed, and it cruises at motorway pace quite happily. In terms of fuel economy, we saw 40.1mpg.

There’s none of Toyota’s hybrid expertise on show here, though. Perhaps that’s something that would have really separated the Aygo X from the rest of the city car pack.

The lack of torque means you need to row the five-speed manual gearbox to keep momentum. So it’s a good thing that it’s nice to use, with a good weight and throw, and we’d choose it over the high-revving CVT automatic ’box. Combined with a light clutch pedal and steering, the Aygo X is an easy car to dart around town in.

The enjoyable city dynamics are joined by a ride quality that feels as if it belongs to a car in the segment above, thanks to the taller ride height and the more mature platform inherited from the Yaris. The Aygo X offers a slightly more grown-up driving experience over many of its city car rivals, but it’s not game-changing.

It’s also more expensive than its rivals, so buyers hunting for a small car on a budget may lean towards the Kia Picanto or the Hyundai i10. These cars lose the taller ride height but keep a similar level of big-car kit for less money than the Toyota. The i10 in Premium spec even advances on the Aygo X with luxuries such as heated seats.