Sharper styling, an improved interior and uprated technology help to boost the MG5 EV’s appeal. The running gear underneath provides decent performance and the car’s solid range remains, which, along with predicted affordable pricing, is a positive.

When it comes to electric cars, SUVs make plenty of sense, thanks to their raised ride height helping to package a big battery. MG knows as much, because its ZS EV is a big-seller for the British brand. But it also knows diversity is key, which is why the Chinese-owned company is still plugging away with the MG5 EV electric estate, having facelifted it for 2022.

While confirmed for Europe, Auto Express understands that the car will make an appearance in the UK market towards the end of 2022. So, ahead of the updated car arriving, what’s it like?

Underneath, the MG5 EV Long Range model still boasts a 61.1kWh battery, which powers a 154bhp electric motor on the front axle. Conversely, and as with the ZS EV, the smaller-battery 50kWh car actually gets more power due to the battery’s different operating voltage.

However, a 0-62mph time of 8.3 seconds for the top model is still more than fast enough, with smooth, swift, step-free acceleration on tap. Plus, both cars offer the same 280Nm of torque, so the difference on the move isn’t so great.

What is of more use is the Long Range model’s 249-mile WLTP-certified range compared with the Short Range car’s claimed 199 miles from a full charge.

The Long Range car also features faster rapid-charge capability, with a maximum speed of up to 87kW possible, compared with 70kW in the base-spec model. It means an 80 per cent recharge will take 40 minutes. 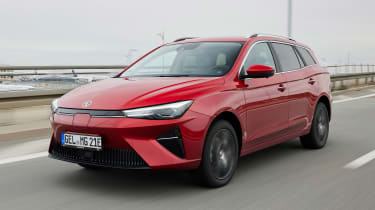 Aside from straight-line performance, the updated MG5 EV’s refinement is strong, and it’s also comfortable. It’s far from a luxury machine, but the ride settles down well when cruising.

This comfort-focused approach does mean that there isn’t much of a sporty feel, but the MG’s steering is sharp enough and its handling is safe and secure, offering plenty of stability in corners.

The regenerative braking is also smooth and intuitive, and allows you to drive along mostly just modulating the throttle to adjust your speed, which makes the MG relaxing to drive in pretty much every situation.

It’s relatively practical, too, as you’d expect from an estate. Although having to accommodate a battery means it’s far from the most cavernous when it comes to load space, with 479 litres on offer with the rear seats in place and 1,367 litres with them folded down, there’s plenty of legroom and a good amount of headroom in the rear.

Up front, MG has given the interior an impressive overhaul, with a smarter cabin layout that features a seven-inch digital gauge cluster and a 10.25-inch touchscreen mounted higher on the dash. This runs MG’s latest iSmart Lite infotainment system, which also features Apple CarPlay and Android Auto compatibility. It’s a worthwhile step forward, as are the cabin materials.

The brand has also overhauled the car’s exterior styling, giving it a much fresher look with slimmer headlights connected by a thin plastic strip and a centrally mounted charging port on the nose.

The front bumper is chunkier and looks sportier, while at the rear, new, slimmer tail-light units with a Y-shaped LED signature give the 5 EV a smarter, more premium look.

There’s a level of kit to match this impression. It’s likely the new MG5 EV will come in Comfort and Luxury trims when it arrives in the UK, with even the base-spec car featuring LED lights, the new infotainment, a rear camera, a three-pin socket to power other equipment, air-con and adaptive cruise with autonomous emergency braking. Prices are likely to start from just under £30,000.