It’s a £40k Kia, but it feels like the new Sportage PHEV can wear that price tag quite comfortably. A strong contender for any company car choosers eyeing up a new car in the 22/23 tax year, the Sportage PHEV showcases everything that Kia is doing right at the moment, with a strong combination of impressive hybrid technology, quality, and value for money. It’ll work out as very economical, too, if you keep it recharged.

This is an important moment for Kia in the UK’s new car registration charts, and the Sportage – the brand’s mid-size SUV and chief rival for the Hyundai Tucson and Volkswagen Tiguan – is leading from the front.

In February, the Sportage nameplate was the most popular new car registration in Britain, allowing Kia to top the charts for the first time after 31 years in the UK market. In 2021 it was Britain’s third most popular SUV, and when we tried this new fifth-generation version for the first time, we hailed it as “the best Sportage yet.”

In terms of pure numbers, the Kia’s off to a strong start. With an official range of 43 miles on battery power alone, combined with CO2 emissions of 25gkm, it slips into the eight-per cent band for company car Benefit-in-Kind tax for 2022/23. Its sister car, the Hyundai Tucson PHEV, can’t match it in this regard with a 12-per cent levy, paving the way for thousands in savings for taxpayers choosing the Kia.

We’re trying the plug-in Sportage in range-topping, slightly sporty-looking GT-Line S trim, which at £43,795 is as expensive as the newcomer gets. This plug-in hybrid technology is offered across a fairly broad range of trim lines though, and starts from £39,595 in the Sportage’s mid-range ‘3’ trim.

It combines a 1.6-litre turbocharged four-cylinder petrol engine with a single electric motor rated at 90bhp, which is powered from a 13.8kWh battery pack. The total system power is 261bhp with 350Nm torque, summoning respectable enough performance figures of 0-62mph in 8.2 seconds and a top speed of 119mph. More importantly, Kia claims 256mpg for its most heavily electrified Sportage.

There’s an EV mode, a Hybrid mode and a third mode labelled ‘Automatic’, which blends between the two and acts as a hybrid mode strongly prioritising the electric motor. The Sportage PHEV also has Eco and Sport modes, and settings for different terrain. 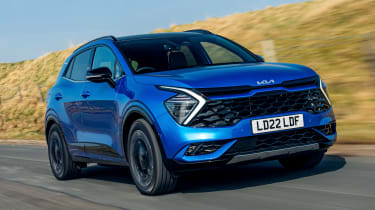 Eco is what you roll away in, silently on the electric motor. Our car claimed 37 miles of electric range on a fully charged battery. It feels like the natural setup for this admittedly heavy SUV, the integration of the hybrid system adding an extra 330kg over the lightest petrol-powered Sportage.

But, it’s a solid enough cruiser. Despite the large proportions – it is bigger than the Tucson – wind noise is well suppressed and the hybrid system is eerily refined and competent when switching between the different power sources. On the motorway, it’s a serene place to be, and you can even run it on electric power alone at cruising speed.

You’re never rushed when driving the Sportage PHEV, so the Sport mode feels a little unnecessary, and does little to improve the performance or add an element of excitement. The steering matches this mood: it’s not particularly sharp and well-weighted. Getting into the swing of things and allowing the hybrid powertrain to do its thing will summon effortless fuel economy – we rattled off a claimed 87mpg on the trip computer completely fuss-free.

The ride, however, could be a little better. We previously tried the PHEV version of the Sportage on adaptive dampers not offered in the UK. The passive setup Brits get isn’t outstanding over bad surfaces, and the 19-inch wheels probably don’t help in this regard, but it’s not firm enough to be off-putting.

Perhaps many buyers will be tempted to reach out for one of the Sportage’s loftier specifications, given the level of standard equipment on offer. It’s absolutely piled high with all of the brand’s latest technologies and creature comforts.

As you get in, you’re presented with two 12.3-inch displays that take over the instrumentation and infotainment. A context-switching touch-sensitive strip is used to control the climate functions – hit the switch button, and a string of infotainment shortcuts will appear instead. The material quality racks up as a marker of how far this brand has come, too. At hand height level there’s liberal application of soft-touch plastics, and overall it’s a pleasant place to sit.

Room inside is strong too, and rear bench passengers will only miss out on a little foot foom, as the floor is jacked high to accommodate the hybrid componentry. This does have an effect on boot space, which is 40 litres down on non-plug-in hybrid versions of the Sportage. It’s still a hefty 540 litres though, with a low loading edge that runs totally flat to the boot floor.