The GV60 is the most convincing Genesis model yet, even if the brand’s pricing confirms that it’ll also be one of the priciest in this top-spec trim. This pre-production car nails many areas an upmarket EV needs to though, with solid performance, good range and great charging capability, plus the refinement, quality and tech are sound. With one or two final development calibration points to really finesse the GV60’s ability, it’ll be a strong premium EV contender.

Genesis launched in Europe last year with a flurry of ‘new’ products – mostly cars it had been selling elsewhere globally but that were new to the UK, helping its bid to take on premium manufacturers such as Mercedes and Audi.

However, while there have been electric Genesis models announced before it, this GV60 EV is where the upmarket arm of the Hyundai Motor Group really gathers pace – and we’ve sampled a pre-production car in the UK in Sport Plus trim (priced from £65,404) to check out Genesis’s chances of rivalling premium EVs such as the Tesla Model Y and the Audi Q4 e-tron.

The GV60 is based on its parent firm’s E-GMP platform – the same architecture that underpins the impressive Kia EV6 and the reigning Auto Express Car of the Year, the Hyundai Ioniq 5.

This means it packs a 77.4kWh battery within its 2.9-metre wheelbase for a claimed range of 289 miles, and with 350kW charging capability a 10-80 per cent top-up takes 18 minutes; Sport Plus trim signifies that the battery feeds a pair of electric motors, one on each axle for all-wheel drive.

Collectively they deliver 429bhp and 605Nm of torque, but hit the steering wheel-mounted Boost button and each motor receives a 27bhp uplift for 10 seconds giving a total of 483bhp and 700Nm of torque. Despite the GV60’s considerable two-tonne-plus kerbweight, this is enough for a 0-62mph time of four seconds flat.

The hit of thrust is instant and solid when you explore the GV60’s full performance, but even in a straight line you’re also aware of the weight, as the car squats down at the rear and bounds forward.

Of course, this is a pre-production model and not representative of the final calibration, so Genesis will no doubt iron out one or two final settings before customers receive their cars – but it’s unanimously good news at this late stage of development. 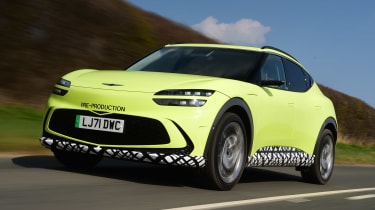 The weight is apparent again when it comes to handling. The GV60 does roll as a result, which actually gives a sensation of how much grip is available. The front end has significant bite turning into roundabouts, while the electronic limited-slip differential at the rear helps to further tighten the car’s line once you apply the throttle; gently is best here until you get the wheels straight, but once they are the ferocity of the acceleration is brilliant.

The ride is fine, if a little inconsistent on our car’s 21-inch wheels. It’s mostly smooth on undulating roads, but occasionally thumps do make their way through to the cabin with worse reactions than you might imagine to some minor imperfections, but much smoother results to bumps you think would really upset the car.

It’s already a refined vehicle when it comes to ride comfort, but if Genesis’s engineers can fine-tune the car’s Road Preview system – which uses sat-nav info and an active camera to scan the road ahead, setting the suspension up to deal with bumps it spots – then it’ll galvanise its dynamic performance further still.

A little inconsistency in the throttle’s response from a dead stop in Eco and Normal modes was the only other noticeable gripe, as the car’s steering felt fast and more positive than in its Ioniq sibling.

Inside, the E-GMP’s clever packaging means there’s plenty of leg and headroom in the rear, but then at more than five metres long you’d expect this from the GV60. The powered tailgate reveals a 432-litre load area, which is just about enough.

There’s also lots of space in the front, while the infotainment is simple, featuring the same slick, quick-responding system that we’ve experienced elsewhere in E-GMP-based cars so far.

Quality is sound, with lots of tactile surfaces that seem befitting of the hefty price tag, even if the brand image might not yet quite be there in the eyes of some.

But that’s not for us to decide, and with this GV60 Genesis looks set to change perceptions. Its individual design turns heads, while the interior, technology and driving experience back this up with a depth that all stems from the platform the car is based on. Genesis’s charge starts here.