The world almost certainly doesn’t need a new 697bhp, £190,000 version of the already exclusive Aston Martin DBX. But as uber-fast, money-no-object SUVs go – the popularity of which is growing in 2022, hence the reason we’ve seen rivals announced recently from both Ferrari and Lotus, to name but two – Aston Martin has elevated the DBX right to the top of a very tall tree with this ‘707’ model (its power output in PS).

In simple terms, it is the fastest production SUV money can buy right now with a top speed of 193mph. So given that it also weighs a fair bit less than its competition from Porsche (Cayenne GT Turbo), Lamborghini (Urus) and Audi (RS Q8), it’s hardly surprising that Aston Martin claims such monumental performance for the 707.

Thanks to the combined effects of a full-blown launch control system, a revised nine-speed automatic gearbox and 900Nm of torque, the 0-62mph time has dropped to a vaguely surreal 3.3 seconds. Crazier still, arguably, is the fact it takes just 7.4 seconds for the 2,245kg DBX707 to hit 100mph from rest, because this makes it one of the most accelerative Aston Martins in history.

To contain such vast increases in power, potency and performance, Aston’s chassis engineers have had to work frantically to keep up, but keep up they have, revising most of the hardware beneath the 707’s dramatic new skin (there’s a new e-diff at the back, new dampers all round, bigger carbon ceramic brakes at all four corners and a wider track at the rear) alongside pretty much all of the software that controls it.

As such, they claim the 707 will most likely beat the Cayenne GT Turbo’s outrageous SUV Nurburgring lap record time of 7min 38.9sec later this year, despite their car wearing a not-especially-trick set of Pirelli P-Zero tyres as standard (the GT Turbo comes on far more track-orientated Michelin Cup 2 tyres).

In technical terms it really is some piece of work, all of which would amount to not much if the whole thing didn’t also look right on the road. But in the flesh it looks very right indeed, with a dramatically more rakish profile thanks to the addition of a big diffuser at the back and a more aggressive grille and nose, plus all sorts of other styling upgrades in-between. 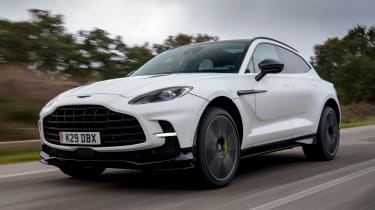 As a result, the 707 looks longer, lower and wider than the regular DBX in the metal, and inside it has a fantastic new pair of sports seats plus a redesigned centre console that’s far more intuitive than you might imagine.

On the move, the 707 feels just how a really sporting Aston SUV should do, with beautiful materials to look at and touch covering every surface, a good driving position thanks to those new seats, and a sense of dynamic intent that crystallises the moment you fire it up.

Initially, you might not realise how much more raw energy lurks beneath the bonnet, because unlike some rivals the start-up procedure does not deliver an almighty burst of revs, although you can program it do so if you really wish. Instead, the 707’s heavily modified twin-turbo V8 merely begins running when you press the magic button, before settling to a super-smooth idle, with GT mode being the default on start-up.

There are three main drive modes to choose from: the aforementioned GT plus Sport and Sport+, again a sign that Aston has simplified the interaction with the car to make it easier to comprehend. Although to be honest, it is difficult, if not impossible, to get your head round just how explosively fast this car feels, and indeed is, the first time you deploy the throttle hard and hold it there for a bit.

The sound that erupts out of the tailpipes and makes its way back into the cabin when you do so is magnificent, no question, but it’s not ridiculously loud, not even in Sport+ mode. But from the way you are squeezed back into the seat and the horizon then rushes towards the windscreen is genuinely extraordinary. It’s a bit like sitting inside a small but very luxurious hotel room that someone has fired into outer space.

And the amazing thing is, the chassis, steering, brakes and revised suspension can all deal with the extra potency, most of the time with effortless ease. The 707 might be nutcase-quick in a straight line, but it’s not a hard-riding, uncompromising hot rod, not like the Cayenne GT Turbo or Lamborghini are on some roads. In fact, the rear suspension is a touch softer than in the regular DBX, so even in Sport+ mode the ride remains soothingly calm, the damping excellent in both its comfort and control. Even the brakes are more than up to the job, most of the time, although they did start to smoke a bit under very hard use.

It’s quire spooky to discover just how wide the 707’s dynamic repertoire is, given how rapid it is, and that’s probably the biggest distinction it has above its more obvious rivals. If you can afford the petrol and insurance, and all the other vastness of expense that comes with a car likes this in the first place, you could live with a 707 every day, no problem whatsoever, whereas an Urus or a GT Turbo both demand more far compromises in terms of their comfort and overall usability.

While it might not be to everyone’s taste purely as a concept, as 190mph SUVs go it is difficult to think of anything that trumps the DBX707. For the time being…