BMW has given the largest member of its SUV line-up a mid-life facelift. This is the new BMW X7, which embraces a totally new split-headlight front-end design marking out its status as one of the brand’s flagship models. This new design twist will be seen on the next-generation 7 Series luxury saloon, when it makes its imminent debut.

Along with the significant front-end redesign for BMW’s Mercedes GLS, Audi Q7 and Range Rover rival, the brand has introduced new technology and a fresh dashboard-infotainment interface, along with a slight realignment of the X7’s engine line-up. The revised X7 is on sale now priced from £80,980.

The redesigned lights are joined by an updated front apron, and even a new version of the X7’s grille. It’s now equipped with the ‘Iconic Glow’ ambient lighting, which illuminates the grille when driving at night. It can be switched off via the infotainment system though.

There’s a new M Sport bodykit and the availability of 23-inch wheels, the largest factory-fit rims ever supplied by BMW, though 21-inch wheels are standard, sizing up to 22-inches on the X7’s new M60i range-topper. Redesigned tail-light clusters are also fitted, while the chrome strip across the tailgate is now located beneath glass.

Inside, along with new standard kit such as a wireless smartphone charger, the X7 gets BMW’s ‘Curved Display’ infotainment suite that is integrated into a redesigned dashboard. The traditional instrument binnacle has been removed, and a floating 12.3-inch digital instrument panel sits in its place. This seamlessly joins with a 14.9-inch central infotainment unit, which is operated by the latest version of BMW’s iDrive software – iDrive 8.

As before, the BMW X7 can seat up to seven across a three row configuration. However, the second row can be specified with two full-size ‘captain’ style chairs with armrests, instead of a three seat bench. Standard equipment inside includes four-zone climate control, ambient lighting, a panoramic glass roof, audio by Harman/Kardon and heated front seats.

A Comfort Plus pack for £3,750 introduces second and third row heated seats, plus heated armrests and centre consoles for the front two seats. There’s also thermal control for the cupholders, rear window blinds and front seats with ventilation and massage functions. 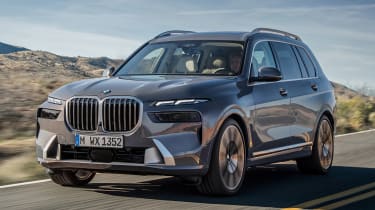 The engine line-up has been revised, with three models to choose from, all sending power to a four-wheel-drive system by way of an eight-speed automatic gearbox. However, the X7 hasn’t been updated to include plug-in hybrid technology. Instead, all versions of the big SUV are now supported by 48-volt mild-hybrid technology.

The old range-topping M50i xDrive is replaced by the M60i xDrive. It retains eight-cylinder power, using a 4.4-litre turbo V8 developing 523bhp and 750Nm of torque. That’s the same as before, while performance of 0-62mph in 4.7 seconds and a top speed of 155mph is also unchanged. However, BMW claims efficiency gains for the hottest version of the X7, with returns of up to 23.7mpg and CO2 emissions from 278g/km.

The six-cylinder petrol xDrive40i model now produces 375bhp and 540Nm, up by 40bhp and 90Nm. 0-62mph is completed in 5.8 seconds and top speed is 155mph, while fuel economy stacks up at up to 30.7mpg. This version of the X7 can use the mild-hybrid system to run only on electric power at very low speeds.

All versions of the new X7 are equipped with adaptive dampers, as well as two-axle air-suspension as standard. The latter system enables automatic self-levelling and ride height changes for off-road use.