Buyers looking to make a seamless shift to all-electric power could well find the BMW iX3 an appealing option. The battery-powered mid-size SUV offers typically solid BMW build quality, superb on-board tech and decent ride comfort, while keen drivers will be pleased to hear that the iX3’s rear-wheel-drive set-up trades 4×4 skills for a little more agility and fun on the road.

With plenty of interior space, a practical range and rapid-charging ability, the iX3 should be able to deal with the rigours of family life with ease, although it does look rather plain next to more stylish rivals and isn’t particularly cheap to finance.

The BMW X3 family SUV is one of the German manufacturer’s best-selling models, so it seems logical that an all-electric version is now available. The CLAR platform that supports the X3 was always designed to take a full range of powertrains, from a straightforward combustion engine to mild- and plug-in hybrid set-ups, along with battery-powered drive. So, although it’s not a clean-sheet design, the iX3 is by no means a compromised afterthought in the electric mid-size SUV market.

Which is just as well, because competition in this area is fierce and growing rapidly, with a number of capable rivals such as the Audi e-tron, Jaguar I-Pace and Mercedes EQC already firmly established. More recent entrants include the Hyundai Ioniq 5 (our 2021 Car of the Year) and the Volvo XC40 Recharge, while the qualities of the significantly cheaper Ford Mustang Mach-E and Skoda Enyaq may still appeal to buyers looking for a capable family EV without the premium price.

Ultimately, family buyers with around £60,000 to spend will probably be looking for a little extra badge kudos to go with the practical boot space and roomy cabin of their mid-size SUV. Enter Tesla’s Model Y as yet another contender; with its practical supercharger network, superb range and similar pricing to the iX3, it delivers a desirable package.

The iX3 looks pretty similar to the regular X3 model, which should appeal to BMW devotees and fans of the marque’s typically understated style. It also offers decent driving dynamics; foregoing the 4×4 SUV norm and opting instead for a rear-wheel-drive set-up that helps to provide a surprising amount of entertainment.

With a single rear-mounted motor, the 282bhp iX3 isn’t the most powerful when compared to its close rivals, although it has more than enough shove for most. If you’re planning on a series of traffic light launches, it’s perhaps best to look elsewhere, but if you’re after one of the best all-electric mid-size SUVs to drive, then the iX3 could fit the bill.

There are just two trim levels to choose from: M Sport and M Sport Pro, while BMW has seen fit to introduce a facelifted iX3 model already – following the design cues of the updated X3 range.

BMW has recognised that most buyers will hardly ever need to rely on the four-wheel-drive capability of their family SUV to get them out of trouble, so in keeping with the driving spirit of the brand, it’s a case of the familiar rear-wheel-drive formula for the iX3. Once behind the wheel it’s clear that this decision has paid off, because the iX3 offers up a truly engaging drive.

Moving through urban traffic is a breeze, with the instant all-electric drive ensuring brisk getaways from junctions and roundabouts, while the throttle response remains smooth at lower speeds and underlines the iX3’s superb refinement. The cabin is free of any excess noise from the electric motor and the suspension set-up does a good job of ironing out bumps. BMW has also engineered an effective regenerative-braking system that allows you to drive using one pedal and helps to top up the battery when driving around town.

While the iX3 is equally composed out on the motorway, it’s on twistier A and B roads where it shows a surprisingly high level of proficiency. A smart turn-in and accurate steering inspires confidence, while body roll is well suppressed – helped by the battery being mounted low along the floor.

With 282bhp and 400Nm of torque instantly available from the rear-mounted electric motor, the iX3 manages 0-62mph in 6.8 seconds – not bad when you consider the family EV weighs in at more than two tonnes (heavier than the Hyundai Ioniq 5 or the Volvo XC 40 Recharge).

You’ll need to stump up more than £60,000 to buy the iX3 outright, while the more popular route of personal finance will still require pretty hefty monthly payments. Lucky then that the iX3 is an efficient machine, with a claimed WLTP-rated range of up to 285 miles. During our own test we managed 260 miles in pretty average conditions, so you should be able to get close to BMW’s own numbers.

We saw a 3.5ml/kWh efficiency rate for the iX3, which is better than the manufacturer’s 3.3ml/kWh combined figure. Based on a home charging rate of 14p per kWh, driving 20,000 miles should amount to £823 in electricity costs – a huge saving over a combustion-engined model.

Throw in the iX3’s rapid-charging ability and BMW’s all-electric family SUV seems like a practical option. Using a 150kW ultra-rapid charger means you can replenish the battery from 10-80 per cent in 27 minutes, while topping up from empty to full at home via a 7kW wallbox takes 12 hours.

Both iX3 M Sport and M Sport Pro models are in group 44 for insurance, so premiums won’t be cheap. But it’s no different with close rivals such as the Audi e-tron and Mercedes EQC, which sit in groups 44 to 50.

Buyers on a tighter budget may want to look at the Hyundai Ioniq 5, which is cheaper to buy and will be cheaper to insure, because the model range covers groups 29 to 40.

BMW models usually benefit from strong residual values and the iX3 continues this trend. Expert data suggests that, over a typical ownership period of three years and 36,000 miles, the all-electric SUV should hold on to around 59 per cent of its original value. This is just ahead of the combustion-engined X3 range, which sits at around 57 per cent.

The Audi e-tron lags well behind the iX3 with an average of 50 per cent retained over the same period, although the Mercedes EQC is more competitive on the used market, holding onto 57 per cent. 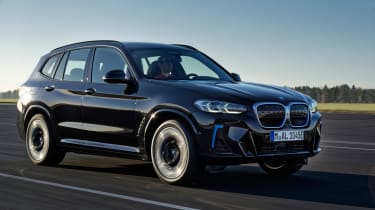 Although the iX3 is still relatively new it’s already received a facelift, taking on the latest design cues of its X3 sibling. This includes slimmer headlights, new tail-light graphics and revised bumpers. The changes don’t affect the iX3’s interior, so it still offers a premium feel with the dash trimmed in Sensatec synthetic leather and Vernasca Leather upholstery for the seats and door cards.

Yes, the overall iX3 package feels a little plain next to the concept car looks of the Hyundai Ioniq 5 or the striking Tesla Model Y, but BMW has clearly decided on an ‘if it ain’t broke, don’t fix it’ approach with its all-electric X3, and everything feels reassuringly solid and of sufficient quality for a £60,000 family SUV.

The facelifted iX3’s infotainment screen is now a 12.3-inch display, compared with the 10.25-inch version featured in the previous model line-up. The graphics are typically sharp, with few rivals managing to compete with the German brand’s mix of usability, a logical interface and fast loading speeds.

BMW offers the choice of touchscreen or physical inputs through its iDrive controller, which is a smart decision. The former is great to use at a standstill – where entering addresses is quick and easy – and the click wheel is great for small tweaks on the move.

The BMW’s digital dials look a little fussy, but have plenty of customisation for the driver, including positioning the mapping between the speedometer and power reserve gauge.

BMW has ensured the iX3 feels suitably premium inside, with high-quality materials and strong build quality, very much like the regular X3. The standard panoramic sunroof means the cabin feels light and airy, while kit such as three-zone climate control, heated front seats and an automatic tailgate add to the comfort and practicality.

Family SUVs need good storage for oddments and the assorted gubbins that kids insist on bringing with them, particularly when on longer journeys. The iX3 has this covered with large door pockets and a useful central tray that houses the wireless phone charger and two cup holders.

Measuring 4,734mm long, 1,891mm wide and standing 1,668mm tall, the iX3 is a little shorter than a Mercedes EQC, but marginally wider and taller. Our 2021 Car of the Year, the Hyundai Ioniq 5, is 99mm shorter and pretty much identical in width, although its bespoke design and clever packaging means it offers more interior space than the iX3.

The iX3 is a big car and the driver and front passenger will have no problem finding a comfortable position. Headroom is decent, too, while rear occupants benefit from plenty of legroom.

The combustion-engined BMW X3 has a 550-litre boot, while the plug-in hybrid model has a reduced 450-litre load capacity. The all-electric iX3 sits between the two, offering 510 litres of load space, but pull the levers conveniently located in the boot to fold the rear seat backs and you open up an increased 1,560 litres. The Mercedes EQC lags behind with 510 litres, although the Audi e-tron offers a substantial 664 litres of luggage space. The iX3 does have extra space under the boot floor to store either the parcel shelf, or the charging cables.

BMW advises a maximum towing capacity of 750kg for the iX3.

Euro NCAP awarded the regular X3 a top five-star safety rating when it was tested in 2017, but due to the iX3’s extra weight and different packaging, the all-electric model will need to be assessed separately. We’d expect the same outcome for the iX3, however, because it comes with a host of safety features, including BMW’s Attentiveness Assistant system, which can detect driver fatigue, and an Active Driving Assistant that incorporates lane-departure warning and emergency-braking functions.

Other standard kit includes cruise control with a speed limiter, front and rear parking sensors and BMW’s Parking Assistant technology, which can identify a suitable space for your car and park autonomously.

Reliability should be good because the iX3 uses the German manufacturer’s fifth-generation electrical drive system which, BMW claims, is up to 30 per cent more power-dense than earlier versions, with a more compact battery and efficient motor.

The iX3 is too new to have featured in our 2021 Driver Power ownership satisfaction survey, although the regular X3 finished in 61st place on a 75-car list in the Best cars to own poll. BMW itself finished in 21st spot out of 29 manufacturers.

BMW offers a three-year unlimited-mileage warranty for the iX3, while the battery system is covered for eight years or 100,000 miles, whichever comes first. This is broadly similar to the main warranty offered by Mercedes, but better than the 60,000-mile limit favoured by Audi.

The BMW warranty can be extended after the initial three-year period with either monthly or annual payments and differing levels of cover. BMW’s paintwork warranty lasts for three years, while its anti-corrosion warranty is 12 years in duration.

BMW offers its Pay Monthly Service Plan to help buyers with managing the cost of scheduled maintenance. The manufacturer quotes from £15 per month for the iX3, over a 36-month agreement.

For an alternative review of the BMW iX3, visit our sister site drivingelectric.com…