You certainly can’t knock BMW for the facelifted 7 Series. The new look really won’t be to all tastes but you certainly won’t miss it in passing, and at first glance many may look at this heavily updated G11 generation car as if it is actually a brand new model altogether.

With such a large body and uncharacteristically light steering it’s not as rewarding to drive as smaller BMWs, but few models in this segment prioritise sharp handling. Luxury, refinement and technology are areas where these cars are designed to deliver and in that respect, the BMW 7 Series excels.

A major update to the BMW 7 Series in 2019 gave it a look that perhaps takes a little getting used to, but there’s no arguing that this luxury limo is still one of the most hi-tech cars for sale in the UK today. The range has been revised along with the visual update, but the BMW 7 Series still majors on technology, refinement and delivering some of the best handling in the luxury car class.

As before, there are petrol and diesel options, while a plug-in hybrid is also available. There are long and short wheelbases and while there’s plenty of technology as standard, BMW also offers a wide range of options. Prices start from around £73,000, while you’ll need to add another £20,000 to bag the top-of-the-range 750i M Sport model

Chief rival for the BMW 7 Series is the Mercedes S-Class, while the Audi A8 and Lexus LS are also fighting for sales in the class. Elsewhere, the Maserati Quattroporte is a more extravagant choice, as are the Bentley Flying Spur or the far more expensive Rolls-Royce Ghost.

That imposing grille added to the 7 Series is designed to appeal to the Chinese market. Small changes to the lines down the sides of the car appear, while the rear end is now dominated by a full-width, chrome finished LED taillight. There are standard and M Sport variants on offer, and if you go for the latter you get a slightly sportier look and blue detailing on the brake calipers. 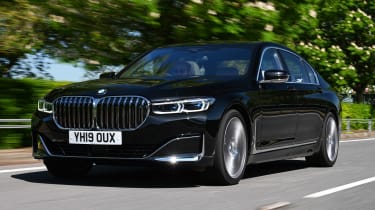 Inside, the 7 Series is well appointed with plenty of wood, leather and Alcantara materials used throughout. It doesn’t move towards BMW’s newer interior designs as used on the brand’s other two luxury offerings: the new X7 SUV and the reborn 8 Series. However, the older, softer-edged design is ageing gracefully and the cabin oozes quality.

While there’s an M Sport trim upgrade, BMW expects most buyers to go for the BMW Individual service, which offers a tailor-made car buying experience. It allows you to customise the interior and exterior to your heart’s content, as well as add a variety of packs to upgrade the technology and seating as much as possible.

The model line-up comprises 740i and 750i petrols (the M760Li is no longer available), the 745e plug-in hybrid, plus 730d and 740d diesels. The basic models use straight-six petrol and diesel engines, while if you pick up a used M760Li you’ll be able to experience its mighty V12. All cars us an eight-speed automatic gearbox, while rear-wheel drive or xDrive four-wheel drive is offered across the range.

For an alternative review of the BMW 7 Series, visit our sister site carbuyer.co.uk…