Packing a work light in your tool box is as essential as spanners, sockets and screwdrivers, because you won’t be doing many tasks around the car without needing help to see the job in hand.

And the explosion of new LED and battery tech shows no signs of slowing, with makers developing creative ways of using it and constantly refining designs. None of the eight lights here was in our last test in 2020, but the family lineage is clear to see.

So which of the current crop is the one you need to charge before tackling your next maintenance or repair job? We turned out the workshop lights to find out.

Our test was split into three main elements: light output, charging and ease of use. The beam brightness and spread were measured, then we looked at charging, wanting to see battery level displayed and that all you need to top up the lamp is included in the pack.

Run time at maximum brightness was also measured. Finally, we checked mounting options and ability to get light where we needed it in an engine bay. Moisture and impact protection ratings plus price were factored in.

The new units from Philips and Ring set the pace here, locking out the top five places. The folding Philips Xperion 6000 Slim won, thanks to great all-round performance. The large ring RIL6200 was second from its folding stablemate, the RIL6300. It narrowly beat the super-flexible NightSearcher.

There’s a substantial feel to this new folding work light from Philips. The blade, with its 500-lumen COB LED strip, can be unfolded 180 degrees and twisted 270 degrees. This, combined with a strong base magnet and weaker versions on the rear, make it easy to direct the punchy, wide beam, which is backed by a useful torch in the tip. Charging is via a supplied mains adaptor and USB-C lead, plus it was one of the best in the run-time test, at around 270 minutes. A great package.

It was tight at the top, but the Magflex had to settle for second place. For a powerful, wide beam, look no further, because it topped our tests and lasted more than 300 minutes, thanks to the 4,500mAh Li-ion battery. There are magnets in the bottom and back, but the base is only hinged and doesn’t twist. There is USB-C charging, but you’ll need to have your own mains adaptor, plus it was the heaviest here. Some people will find the UV light in the top useful, but others may have preferred a torch.

There should be no problems getting light where it’s needed with the i-Spector, because the COB LED strip is mounted on a very flexible arm that gives multiple options. Like the rest of our top five, it boasts 500 lumens and was just behind the best in the beam test. It is the only unit where power was controlled by a rotary switch rather than its rivals’ two or three modes. Not so good was the two-hour run time. But it does have IP54 moisture protection, and that cracking price helps it secure third spot. 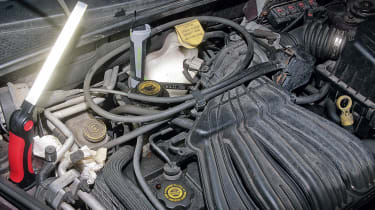 There’s more than a passing resemblance between this and our winner, and that’s reflected in the close result. They’re pretty much the same size, with the same fold-and-twist LED blade that delivers 500 lumens. It just topped our winner in the beam test with a similar spread, but had to give best in the durability test, at just over four hours. There’s multi-stage battery monitoring and USB-C charging, but you’ll need your own adaptor.

The price tells you this new Philips light is aimed more at the pro market than its test rivals. It has a leak-detecting UV light and a useful torch. The 500-lumen beam was a match for the best, and has a CRI 95 rating for natural colour rendering. Battery state is shown via a percentage display, and the 4,400mAh battery lasted almost four hours. It also has a find-my-device tracking system with remote (an option on the winning Slim), and works with an optional charging dock. It’s a premium package at a premium price.

Another variation on the folding work light, yet this time the unfolded blade does not twist along its length, but instead rotates 180 degrees around the hinge, which is not quite so useful. There are three power levels, plus a red light with a flashing option. There are also two levels for the torch. Laser claims a 550-lumen maximum, but it was a bit behind the best in the beam test, while the spread was much narrower. The biggest problem was the 30cm charge lead, which was much too short.

This Sealey is a dead ringer for the Laser apart from the casing insert colour. But they are built to a different spec, and Sealey hasn’t made the same mistake with the charge lead, because it’s a useful metre long. There are also just two power levels and no red light options. It had a similar narrow spread, but the beam got close to the top performers, despite claiming a 550-lumen output. Like its Laser rival, it struggled in the run-time test and just made it to two hours.

Our third ‘slim’ work light in this test, but for Draper this means a unit that’s about as thick as a Magic Marker. While it’s great for slipping in a tool box – there’s even a pen clip – the narrow base means it easily overbalances when not on a metal surface. The rear and base magnets are good, but the blade does not twist. To compensate there are different-length COB strips on the front and back. Rivals outgunned their 300-lumen output beam, but run time was useful, at more than three hours. This is more than up to the job if storage space is tight.

Now you can see what you are doing, keep your workshop warm with the one of the best garage heaters…