You may have applied a protective coat of wax or a sealant to your car before winter but, judging by the way many disappeared in our test, chances are it will need refreshing unless you used one of our top choices.

Ceramic was the buzzword in car care 12 months ago and more products have been launched over the past year with that magic ingredient. We conducted our longest ever test, totalling almost six months, to find which best lived up to the ceramic hype.

We had no shortage of contenders for this test, but there are still many more waxes and sealants doing a great job without the magic SiO2 ingredient, and we have focused on those here.

Unlike ceramics, there’s a wide range of formats, from hard waxes and pastes, through to liquids and spray-on sealants. We applied them to their maker’s instructions on a carefully prepared bonnet, which was clayed and had all existing coating removed.

The bonnet was left outside for six weeks through the worst of the winter weather, with water beading assessed regularly. The beading was at the heart of the test, but we also took into account ease of use and price, factoring in that hard waxes go further than liquids.

In a straight head-to-head this would win. It matched its new-tech rivals for durability, slowing only at the end, and it has a price advantage when you factor in how far it goes. Like the Shelby it keeps its five stars, since it’s still our wax favourite and this test is more about comparing technologies than individual products.

We were seriously impressed by this innovative solution. It comes with a syringe and cup to measure the 5ml that needs to be added to 250ml of water in a snow-foam lance. Spray on, leave for five minutes, then pressure wash off. It promises six to eight weeks’ protection, but we kept extending our test because it was still present and working.

It was still beading when rivals had flagged at the end. Remarkable and, on the basis that the bottle is good for 20 applications, excellent value for money with years of protection. There was little to choose between it and its ceramic rival, but the price difference tips the balance toward Duel’s FLEX. With super-simple application, it’s a very attractive package.

Flex gave our reigning ceramic champ a hard time despite its modest durability claims. However, Shelby retains its five-star rating – especially now that changes to the formula will make it easier to apply. The new version was not available when our trial started, so we look forward to testing it again soon.

We’re never quite sure what the Angelwax guys will send in for our wax and sealant test, and this time it’s Formulation #1. It made our top five when we last tested it in 2016, and it takes our runner-up spot here.

The handmade, hand-poured wax has been around since 2009 and claims six months’ protection, so it was no surprise to see it still beading strongly after just six weeks. It goes on and buffs easier than our winner, but can’t offer the same great-value deal.

We’ve tested Autoglym’s flagship wax several times since its launch. It has been a top-10 regular with good performances on the bonnet, but held back by a distinctly premium price. The conditions this year seemed to suit it better and it was closer to the front of the field on the bonnet than previously, helping it secure the final podium spot.

However, it’s still among the most expensive, because you get just 120g of wax in the stylish box, which is around a third empty space, but there is also a decent microfibre cloth and dual-compound sponge applicator.

Last year saw an impressive debut in this test from Car Gods 54 with its Athena liquid wax securing fourth spot. This time around it was the turn of Cronus Holy Water Secret Shield to take that position.

It is also our pick of the liquid solutions after a podium filled with paste waxes. Cronus Holy Water is one of the easiest products to apply, with no more than a simple spray and wipe needed to get a shine. 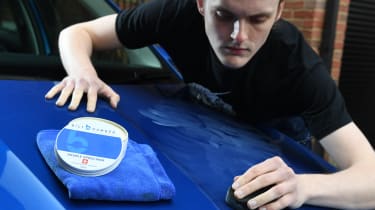 Car Gods 54, the detailing brand from CarPlan owner Tetrosyl, is also fairly easy on the pocket, with only two or three trigger pulls needed per panel.

Gyeon’s products continue to impress in our tests and it’s gone its own way with this wax. It comes in a lip balm-style stick design – a twist of the bottom forces more citrus-fragranced hard wax out the top.

It needs to go on with a sponge applicator, which isn’t included, left for 30 minutes, then buffed with a microfibre cloth, which is supplied. Q2 Wax was a little behind the best at some points in the test, but was one of the strongest performers at the end.

An impressive test debut for the Sunshine version of Blendz, which got the closest to our winner in the beading tests. But you only get 140g for your £40, which means it drops down the leader board.

It needs to go on in a thin film, then allowed to cure for five to 10 minutes before buffing to a shine. Autobrite claims four to five weeks’ protection for the single layer we applied, but it was still working at the end of our test, with little sign of flagging.

Original Wax has been around for years and is a regular in our wax top 10, and it makes another appearance here. It’s a proper blast from the past from its retro styling and the fact it comes in a tin, to its old-school formulation and application.

There are no citrus or confectionery fragrances here – this smells like it comes from somewhere distinctly industrial. It takes a bit of effort to apply because it cannot be left to dry, but for protection on a tight budget nothing else gets close.

We tested Stjärnagloss’ Fantastisk paste wax in 2020, when it made it into our top 10. Now this spray sealant has repeated the result. It’s a lot easier on the pocket and can be used on wet and dry panels, saving the effort of drying after rinsing.

The website claims three to five months of protection, but it had started to slow by the end of our test. It was still working, yet it took longer to clear its section after six weeks than at the start.

Like our winner, this is a carnauba and polymer-based hard wax, but it couldn’t quite match Bilt-Hamber’s performance on the bonnet.

Unlike some rivals, it got relatively stronger during the test. ValetPRO was a step behind the best at the beginning, but as the six-week mark loomed it was among the front runners. It is also one of the more cost-effective hard waxes, and is easy to use. This is the one to go for if you prefer to apply wax to the whole car before buffing.

The fledgling car care brand has done well in our tests recently, but the Supa Nova wax we tested last year failed to impress. It’s a different story with T2, which secured a spot in the top 10.

T2 has montan wax in its formula, which has a natural water repellency that’s better suited to our test. It started strongly but faded a little towards the end, and the result was not helped by being at the more expensive end of the price range.

Now you can pick out the best paint protection, take a look at the best glass cleaners on sale…