The all-electric Q4 e-tron SUV ticks all the boxes for family life: well-equipped, practical and relaxing to drive, it is expected to become the German company’s biggest seller behind the A3 hatchback.

It outshines other premium mid-size SUV rivals, such as the Mercedes EQA, on range, with a claimed maximum of 316 miles, while its fast charging capability means those longer trips needn’t require meticulous planning. If you’re after a premium family SUV and ready to ‘go electric’, then you must consider the Audi Q4 e-tron.

The Q4 e-tron SUV is perfectly placed to lead Audi’s charge into the EV mainstream, with a breadth of talent that will fulfill the needs of most families. Like its more expensive e-tron and e-tron GT siblings, the Q4 e-tron still trades on a high level of luxury and refinement, but entry models sit between the Q3 and Q5 SUVs on the price list, so it remains an accessible alternative to a more conventional petrol or diesel model.

Audi is the latest Volkswagen Group subsidiary to utilise the company’s electric MEB platform, with the Q4 e-tron employing architecture already applied across the Volkswagen ID.3 and ID.4 models, the Skoda Enyaq SUV and the Cupra Born hatchback. Of course, Audi has seen to it that the Q4 e-tron has the company’s trademark luxury feel, which helps complete a first-rate package. In fact, we were so impressed with Audi’s new all-electric SUV that it received a commendation in our Premium Electric Car of the Year award category for 2021. 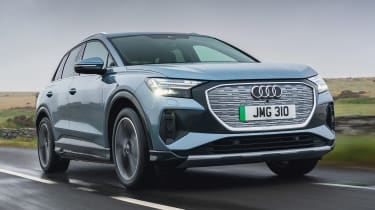 Buyers interested in the Audi Q4 e-tron SUV might be drawn to higher-spec versions of the Volkswagen ID.4 or Skoda Enyaq, while our Premium Electric Car of the Year award winner, the Hyundai Ioniq 5, will turn heads with its concept car looks and family practicality. Other premium rivals such as the Mercedes EQA, Volvo XC40 P8 Recharge and BMW iX3 will also tempt customers with their own brand of SUV sophistication. As is the trend with current luxury SUVs, Audi also offers a Q4 e-tron Sportback version with its coupe-like swooping lines and an 18mm drop in height.

There are three different power set-ups for the Q4 e-tron: the entry 35 model has a 52kWh battery and a single, rear-mounted 168bhp motor, while the mid-range 40 variant boasts a 77kWh battery and 201bhp. The four-wheel-drive 50 quattro version comes with an extra motor at the front and a 295bhp total output. The manufacturer claims maximum range figures of 209 miles, 315 miles and 291 miles, respectively.

For an alternative review of the Audi Q4 e-tron, visit our sister site drivingelectric.com…