This is the new Smart #1 electric crossover, and it represents the start of a new era for the city car brand. This compact EV is the first car developed under joint Daimler-Geely ownership and marks the transition of Smart to an all-electric manufacturer.

The new Smart #1 is based on an all-new electric architecture from Geely, called SEA. This will underpin Smart’s forthcoming new range, while the #1 also sets the template for the brand’s future design direction. Auto Express understands that all of the firm’s future cars will use the same ‘#’ numbered nomenclature, which will position its products chronologically rather than by size or sector.

From launch the #1 is installed with a 66kWh battery, for a claimed headline range of up to 440km (273 miles). It’s likely that more affordable, smaller battery options will be available in time, too.

With 150kW rapid charge capability, the 66kWh car’s battery can be topped up from 10-80 per cent in less than 30 minutes, while plugging in to a 22kW AC charger will return a 10-80 per cent charge in around three hours.

The battery feeds a single rear-mounted motor, producing 268bhp and 343Nm of torque – and while Smart hasn’t outlined a 0-62mph time it has confirmed a top speed of 112mph. Weighing 1,820kg, the #1 should be able to cover the benchmark sprint in less than seven seconds.

At 4.27 metres long the #1 is the largest Smart ever, highlighting that the brand will expand beyond its city car roots into more larger segments. Unlike the four-seat Concept #1, the production #1 is a full five-seat SUV, and it places an emphasis on practicality as well as style.

This is helped by a 2.75-metre wheelbase, which is relatively long given the car’s overall length and should help maximise passenger space inside; Smart claims that although the #1 is similar in size to a MINI Countryman there’s as much space inside as a Mercedes E-Class executive saloon. The #1 also features a 15-litre front storage area in the nose and a conventional boot that offers up to 411 litres of load space. 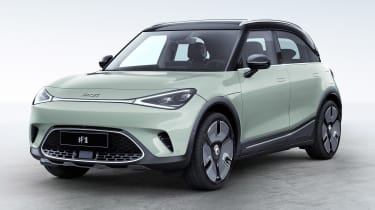 One area that is very close to the Concept #1 is the car’s styling. This new SUV highlights Smart’s future design direction, with smooth surfaces, a simple lighting signature at the front and the rear, and a sleek roof design that swoops down over the car’s C pillars. The #1 launch car rides on 19-inch alloy wheels.

According to Gorden Wagener, Chief Design Officer for Mercedes-Benz, Smart’s part-parent company, “The new Smart #1 stands for the re-start of the brand and showcases our new design DNA of Sensual Product.

“It is grown up, cool and embodies beauty with smart solutions. It is new, fresh, and enchanting.”

This contemporary look has been a big focus for Smart, and the same is true inside, with a minimalist design and feel. The dash is dominated by a central 12.8-inch touchscreen that also places a distinct focus on connectivity as the infotainment can be upgraded through over-the-air software updates. It’s joined by a 9.2-inch full HD digital dash and a 10-inch head-up display.

While Smart has not yet outlined prices for the #1, the brand has highlighted that it will be competitive with rival EVs such as the Hyundai Kona Electric and Volkswagen ID.3. Volvo will produce a small electric SUV of its own on the same platform, and the Smart will be positioned as a cheaper alternative to this. It points to the #1 starting from around £32,000 when it goes on sale later this year. The #1 goes into production towards the end of the year ahead of deliveries commencing in 2023.