As Honda’s new Civic Type R goes through its final stages of development, the hot hatch has clocked the front-wheel drive lap record at Suzuka, the home of the Japanese Grand Prix.

For a standard Type R to convincingly beat the track-focused Limited Edition – which achieved its lap time with the benefit of Michelin Pilot Sport Cup 2 tyres, lightweight forged wheels and stripped-back nature – bodes well for the car’s performance.

However, we don’t know what kind of rubber this prototype was wearing – it’s worth noting when Honda claimed the front-wheel drive Nurburgring record with the FK8 Type R, it did so with the factory-fitted Continental Sport Contact 6 tyres switched for Cup 2s. When contacted, Honda UK wasn’t able to confirm how the 2022 car was configured for the Suzuka run.

The latest Civic Type R hot hatch is based on the Mk11 Civic hatchback, which was revealed back in June. It features the same five-door fastback body style as its predecessor, although Honda’s designers have elected to tone down the previous car’s styling slightly.

However, there’s still an aggressive aero kit present. Up front the hot hatchback features the same slim LED headlights as the standard Civic, but they flank a sportier mesh radiator grille.

The front bumper is more aggressive than the standard car’s, with an enormous intake that extends right down to the lower splitter. There’s also a fresh pair of intakes underneath the headlamps. However, the fact that they’re covered in camouflage wrap suggests they’re purely for aesthetics rather than function.

The new Type R will have a much wider track than the standard Civic, with wider wheel arches covering large alloys. The side skirts are also deeper, and feature a new aero fin ahead of the rear wheels to clean up the air flowing down the car’s flanks. The wheels are bespoke to the Type R and are shod in a set of Michelin Pilot Sport 4S tyres.

At the rear, Honda’s new hot hatch retains the full-width light bar of the standard Civic, but the rear bumper has been redesigned with a pair of vent cut-outs and a deep diffuser. This houses a triple-tailpipe exhaust set-up which, unlike the current Type R, places the largest outlet in the centre. The system is designed to provide a more aggressive note under hard acceleration, while minimizing drone at a motorway cruise.

Inside, the Type R will mirror the standard car’s design with a new nine-inch infotainment system mounted on the dashboard, and a fresh digital instrument cluster ahead of the driver. It’s also highly likely the Type R will feature a new pair of sports seats, an updated sports steering wheel and aluminium pedals, plus the Type R’s signature aluminium shift knob.

However, the new car’s most interesting feature will be its powertrain as, while the rest of Honda’s range is steadily marching towards electrification, the next Type R won’t. The brand recently clarified its EV strategy by announcing it aims to only electrify its “mainstream” European line-up by 2022, which should delight enthusiasts.

When asked if this included the Type R, Tom Gardener, Senior Vice President at Honda Europe, told us: “We have our main pillars that are going to be electrified. Clearly we have a very famous product – such as the derivative of the Civic, which I guess is what you are referring to in the Type R – but no decisions have been made on that yet.

“We’re very much aware of customers’ strong appreciation of the current model, and we’ll have to deeply consider the best progress forward.” 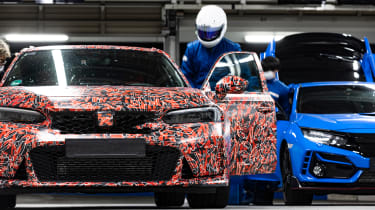 Based on Gardener’s statement, we expect the new Type R will use an updated version of the existing car’s turbocharged 2.0-litre four-cylinder petrol engine. It’s not yet known if power will rise over the 316bhp its predecessor produced, although it’s highly likely in a bid to help keep the Type R competitive with the new Volkswagen Golf R and other larger hot hatchbacks. It’s almost certain that the Type R will retain its six-speed manual gearbox and front-wheel drive set-up, too.

Production of the Civic Type R will also move from Swindon, where its predecessor was built, to one of Honda’s facilities in Japan.

The very first Civic to wear the Type R badge was built in Japan as a three-door hatch. It had a 1.6-litre VTEC engine that developed 181bhp.

The EP3 generation Type R was the first to be manufactured at Honda’s Swindon plant and sold overseas. It was powered by a 197bhp 2.0-litre VTEC engine.

Two versions of third-generation Type R were launched: a four-door saloon for Japan and a three-door hatch for Europe, both with the same engine as the EP3.

Honda moved to a five-door hatchback body for this generation. The Type R also had turbo power for the first time, with a 306bhp 2.0-litre four-cylinder.

Current Type R will be the last produced at Swindon. It’s the most powerful version yet, with 316bhp, and was the first to be exported to North America.

What do you think of our exclusive Honda Civic Type R image? Let us know in the comments section…