Drivers in the UK are planning to make 21.46 million leisure trips between Good Friday and Easter Monday this year, making for the busiest Easter bank holiday weekend on the roads since 2014.

Good Friday will see motorists undertake 4.62 million leisure journeys, according to data from the RAC and traffic analytics firm INRIX, while 3.96 million will be made on Easter Monday. Easter Saturday and Sunday will each see 3.63 million trips, plus an additional 5.6 million will be made at some point over the four-day period.

The RAC and INRIX predict the traffic on the roads will be exacerbated by the closure of some parts of the railway network, such as stretches between London and Birmingham. Train strikes are also expected in parts of Scotland and the north of England.

The worst congestion over the weekend is likely to occur on the M6 northbound between Liverpool and the Lake District, the M6 southbound towards Stoke-on-Trent, the M25 between Surrey and the M40 exit, and the A303 near Stonehenge.

According to the RAC, only 19 per cent of drivers always check the condition of their car before setting off on a long journey. The breakdown company advises motorists to look at their car’s oil and coolant levels, as well as tyre condition before driving. 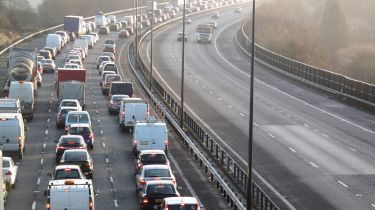 Inflated fuel prices are expected to keep a small number of drivers off the road this weekend – six per cent say they’re avoiding driving for this very reason. National Highways is also lifting more than 1,000 miles of roadworks in a bid to ease congestion.

Bob Pishue, transportation analyst at INRIX, said: “Even with a significant increase in petrol prices, we expect a large jump in holiday driving compared with the last few years.

“Drivers should expect congestion on major roadways around urban areas and popular destinations. Knowing when and where congestion will build can help drivers avoid the stress of sitting in traffic.”

RAC spokesman Rod Dennis added: “The key to avoiding the worst of any jams is planning. Put simply, the earlier you leave in the morning the more likely you are to miss the worst of the queues, especially if you are travelling a longer distance.”