A new British coachbuilding company has emerged to capitalise on the growing popularity of classic car restomods: fully refurbished, modernised versions of motoring icons. Called Caton, the newcomer has created its own rendition of a ‘two-seater fifties British sports car’, shown in this dark teaser image. The car will be revealed in full at Salon Prive London on 21  April.

According to the brand, its projects will be ‘sympathetically enhanced’ versions of the originals, rather than radical redesigns, so it should be instantly recognisable when the covers are pulled off later this month. The classic in this teaser has a traditional long-nose profile and a frameless wraparound windscreen, with a teardrop-shaped rear end.

The restomod will be re-engineered under the skin, too, albeit with respect to the base car’s DNA. To that end, expect more power to be massaged from its existing engine and an uprated suspension setup to handle the extra grunt, while retaining familiar core handling characteristics. According to Caton, ‘modern technology’ will also be integrated into the package, so expect some sort of infotainment system to be carefully installed within its bespoke interior.

Caton hopes that its designs resemble what would’ve been possible if the original creators had modern tools and technology at their disposal, with aluminium body panels crafted to tolerances of 0.2mm. The company has partnered with Envisage Group for manufacturing and engineering support, drawing from the firm’s experience with OEM brands and classic car restoration. 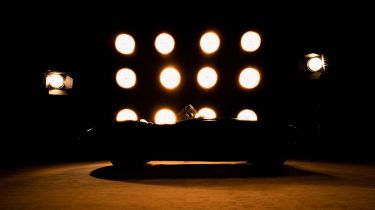 Caton will utilise numerous Envisage facilities, including its milling, 3D printing and paint laboratories to create coachbuilt models, and as with other restomods, each customer will likely be offered a huge array of personalisation options.

Speaking about the collaboration with Caton, CEO of Envisage Group Tim Strafford said:  “Caton was the vision of our investors, to create a unique brand that utilises precision engineering, bespoke craftsmanship, and British skills, to create unrivalled products in the automotive sphere and beyond.

“Caton will stand on its own, as a specialist brand, inspired by precision engineering. It will offer ultra-exclusive, highly-aspirational British-designed products within the automotive sector and beyond. This exciting new brand will demonstrate what is possible when design and technical development are pushed to the highest possible levels with exceptional luxury creations.”

Which classic model do you think will be receiving the restomod treatment? Tell us in the comments…