A new Lamborghini Huracan variant is expected to join the range next week after the brand confirmed a new model would be revealed on 12 April.

A teaser confirms that the new model will make use of a V10 engine, all but certain to be the 5.2-litre naturally-aspirated V10 unit that has powered all versions of the Huracan since the supercar’s introduction in 2014.

Online rumours suggest that the model is a new hardcore performance variant of the Huracan, which is tipped to bow out of production next year. Lamborghini has already confirmed that two more versions of the Huracan are planned as part of its plan to “conclude the age of internal combustion engines and move on to hybridisation.”

One of these models is widely assumed to be an off-road inspired version of the Huracan called Huracan Sterrato – the same name used for a one-off prototype version of this model revealed by the brand in 2019. 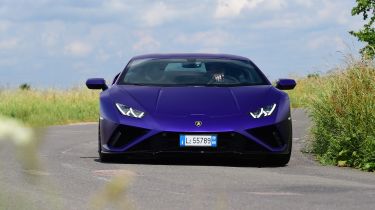 However, next week’s model is rumoured to be a hardcore road-going variant intended as a slightly more grand-touring friendly version of the wildest Huracan yet: the Huracan STO.

The first official showing of the newest Lamborghini is set for April 12th, 2022, at 12 pm CEST.  See you on https://t.co/vYFlwonACg and our YouTube channel. #Lamborghini pic.twitter.com/ohUEdXMsne

Trademark applications point to the name Huracan Tecnica being readied for the model, which is said to carry the STO’s performance with a more road-friendly outlook. It will almost certainly make use of the 631bhp version of the 5.2-litre V10, equipped in the STO, as well as that car’s chassis and suspension tweaks, plus carbon-ceramic brakes as standard. Drive will go to the rear wheels exclusively.

However, the bodywork will be toned down considerably, placing it somewhere between the standard Huracan and the STO visually. All will be revealed next week.

Click here to read our review of the Lamborghini Huracan STO…