Mercedes will unwrap its new flagship electric EQS SUV on 19th April, and a newly released teaser image of the car provides a glimpse at its styling.

Set to rival the BMW iX and Tesla Model X, the EQS SUV will adopt smooth, aero-optimised surfacing, with what appears to be a new LED running light design. Like Mercedes’ other electric models, a daytime running light strip will span a closed-off front grille, with a slim LED light bar featuring across the tailgate.

Since there’s no engine and gearbox eating up space in the chassis, the brand’s engineers have pushed the windscreen towards the front wheels for more cabin space compared with the combustion-engined GLS SUV.

Given the EQS SUV will be offered as a seven-seater, it should offer a solid level of practicality – and decent boot space in five-seat form.

Certain styling elements are familiar from other Mercedes EQ models, such as a lack of surface creases and a pair of bonnet bulges which are similar to the smaller EQA’s. Digital wing mirrors are a popular method of increasing range in electric cars, but the pre-production EQS SUV we spied is fitted with conventional units.

Mercedes’s design chief, Gordon Wagener previously discussed the EQS and upcoming EQE SUV’s design brief with Auto Express, saying: “They will look different in a similar way as I describe the EQS. They will be more seamless, more integrated, more aerodynamic, more futuristic looking, so it will be a new type of SUV.”

Mercedes has also pulled the covers off the interior of the EQS SUV, confirming that it will offer the same 55.5-inch Hyperscreen infotainment system found in the EQS saloon. The system uses a 12.3-inch digital instrument cluster, a 17.7-inch central touchscreen and a third 12.3-inch unit for the passenger. 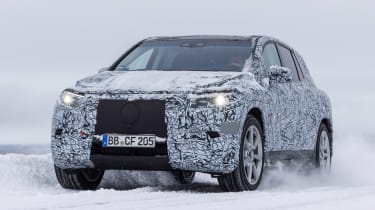 The huge screen isn’t the only interior feature taken from the EQS saloon, we can also see the same seats, steering wheel, split-opening central armrest and the ‘MBUX High-End Rear Seat Entertainment Plus package’ comprising a pair of 11.6-inch displays mounted on the front seatbacks.

Mercedes has also confirmed that an even more luxurious Maybach version of the EQS SUV is in the pipeline, which was previewed by a concept at last year’s Munich motor show. Britta Seeger, Mercedes’s head of marketing and sales, said during a brand electrification strategy update last year: “What applies to the Mercedes portfolio also applies to our incredibly strong sub brands – we want to go electric. So, you can look forward to a top-notch EQS SUV version of Mercedes-Maybach, for example.”

The EQS SUV should also adopt Mercedes’ Level 3 autonomous driving technology, which will allow the car to drive itself with limited driver supervision at speeds up to 37mph when in slow-moving motorway traffic. The UK Government recently legalised such systems for use on the road, meaning there’s no longer any legislative red tape for British buyers.

Mercedes has also announced that battery production for the new EQS SUV and the EQE SUV will take place at a new plant in Alabama, USA.

Mercedes is yet to confirm any technical details on the EQS SUV, but we expect it’ll be based on the same EVA2 underpinnings as the saloon. As such, it should be offered with a similar range of battery packs and electric motors.

For reference, the EQS saloon is currently available in three variants – the 450+, 580 4MATIC and AMG 53. The first features a single electric motor mounted on the rear axle, which develops 329bhp and 569Nm of torque. The second features an electric motor on each axle which gives four-wheel drive and outputs of 516bhp and 855Nm, with the AMG model producing a monstrous 649bhp and 950Nm of torque.

The EQS saloon is available with either a 90kWh or 107.8kWh battery pack, the larger of which offers a maximum range of 478 miles. We expect the SUV’s less aerodynamic shape will make a dent in that figure, but a range of at least 400 miles could be achievable.

There’s also no word on pricing yet but expect it to start above the EQS saloon’s £99,995 starting price.

Now read all the latest news on the EQS SUV’s baby sibling, the EQE SUV…