The Niro is really the model that kick-started Kia’s transformation into one of the leading brands for electrification adopters. And now, five years after its debut and with more than 300,000 examples sold, it’s time for an all-new generation of the car, which goes on sale this month and starts arriving in customers’ hands this August.

The previous Niro was based on one of Hyundai-Kia’s older platforms, shared with the Ioniq. But that changes now because the new Niro – which will again be available in hybrid, plug-in hybrid and pure-electric versions – is the first Kia to use the latest generation of the company’s mid-sized K platform.

The new Niro EV (the name changes from e-Niro for this generation) has a cleaner look at the front, with a central socket for the charger and, on the EV, a frunk with around 20 litres of storage that should be handy for keeping wet cables out of the boot.

The big change really comes at the side, where Kia has given the Niro a much more dramatic look. On the EV it’s enhanced further by the steel-grey inserts along the sides, but the standout feature, across the range, is this coloured ‘blade’ that covers the C-pillar. In a neat trick, it actually stands proud of the main bodywork, helping to flow air along the side of the vehicle and improve aerodynamic efficiency. Expect Kia to play around with colours and finishes on this, giving customers extra scope for personalisation.

The three versions of the car all get updated powertrains. The Hybrid and Plug-in Hybrid continue to use Kia’s 1.6-litre GDi petrol engine, along with a six-speed dual-clutch automatic transmission. The Hybrid has a 1.32kWh battery and a total output of 139bhp, while the beefier PHEV gets a boost in battery size – from 8.9kWh in its predecessor up to 11.1kWh – and a combined power figure of 180bhp. The EV has 201bhp and a 64.8kWh battery.

Kia is still fine-tuning the car’s efficiency but expects the PHEV to manage up to 40 miles on electric power alone, and the EV to be capable of up to 288 miles between charges. The two Hybrids both manage 0-62mph in around 10 seconds; as you’d expect, the e-Niro’s instant electric punch delivers a quicker time of just under eight seconds.

This Niro is 6.5cm longer overall than the car it replaces, and the wheelbase has stretched by a couple of centimetres, so there’s enough room on board now for four six-footers. 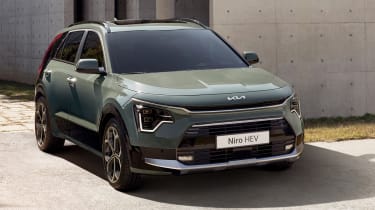 Up front, the dash is dominated by the twin 10.25-inch displays, and ambient lighting which is designed to extend their effect right across in front of the passenger. Much of the interface will look familiar to anyone with a current Sorento or Sportage, although the Niro’s screens are a little smaller. The Niro does get the same multifunction panel in the dash, though, allowing you to flick between infotainment and heating controls.

The Niro EV is also able to offer vehicle-to-load charging – allowing you to plug in everything from a laptop to a mobile fridge, if you need to. It’s likely to be standard on higher trim levels, and optional elsewhere.

The boot is a decent shape, and it features a variable-height floor, although the overall capacities vary considerably depending on your choice of powertrain. The most spacious of the trio is the BEV – with 475 litres, not including the frunk. The Hybrid offers 451 litres, while the PHEV is more than 100 litres down on that, at 348 litres.

This Niro looks set to deliver more EV tricks than the model it replaces. Kia is promising more integration with its phone app, for remote control of key functions, and the navigation system will recognise when you’ve targeted a charging station and pre-condition the battery to its ideal temperature to maximise the recharge speeds.

The hybrid models will also recognise zero-emissions zones and try to maximise electric running within them, and on the PHEV you can define and save your own electric-only areas, so you can make sure you do the school drop-off in eco silence, for example.

Kia is still finalising UK specs and prices for the Niro, but we do know that it’ll continue to be offered in three trim levels, across all three powertrains. There’s no word yet on pricing but given the slight increase in size and improved spec, expect a modest increase over the outgoing model – perhaps to a starting figure, for the Hybrid, of around £26,000.