The Ford Mondeo as we know it is no more, as Ford has confirmed that the model has now ceased production in Europe.

A body engineer at Ford’s Valencia plant has shared an image of the last two Mondeos produced for the European market on networking site LinkedIn, with a caption reading (translated from Spanish): “Yesterday we had the farewell to the #Ford #Mondeo. The truth is that it is very sad to think that these have been the last two vehicles produced and that I will no longer see them at the plant.”

Last year it was confirmed that the Ford Mondeo saloon would be phased out of production by March 2022, with Ford citing changing customer demand as the reason for calling time on its previously big selling family car. A UK press representative for the company confirmed that the final fourth-generation unit was completed on 30 March 2022.

The nameplate has at least returned, but not for a vehicle we’ll get in Europe. The new fifth-generation Mondeo is designed at Ford’s China Design Centre in Shanghai specifically for the Chinese market, where cars of its type are still in high demand. It’s expected to be built by Changan Ford alongside the Evos SUV. 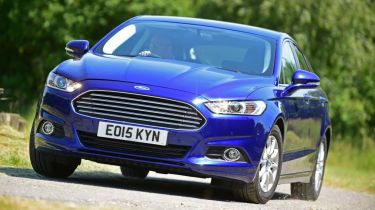 It reflects a wider industry trend as family car buyers are turning to SUVs over traditional big hatchbacks and saloons. In 2020, 39 per cent of Ford’s sales were SUVs and crossovers. That’s an eight per cent increase from 2019 alone despite the Covid-19 pandemic, and 50 per cent of buyers of the latest Kuga are opting for the plug-in hybrid version of the brand’s mid-size family SUV.

Ford had been hotly tipped to reinvent the Mondeo as a sleek crossover in 2022, but a statement from Ford reads: “While we do not comment on speculation concerning our product plans, we can state that we have no plans for a future Mondeo in Europe.”

Now Mondeo production has stopped in Valencia, and the company will use the extra production capacity to manufacture the 2.5-litre hybrid engine used in models such as the Kuga PHEV, plus the regular hybrid Kuga, and hybrid versions of the Galaxy and S-Max people carriers – both of which will continue in production for the foreseeable future.

Also, from late 2022, Valencia will expand with increased battery manufacturing capacity. Battery assembly for the brand’s growing line-up of electrified vehicles has been taking place at the site since last September.

Ford recently announced plans to repurpose its Cologne manufacturing plant into a build site for its next generation of electric vehicles. Currently, it’s where Britain’s most popular new car – the Fiesta – is made, but from 2023 onwards it will see all-electric Fords using the Volkswagen Group’s MEB platform roll off the production line.

What are the best family cars on sale right now? Click here for our top 10…