DeLorean is plotting a comeback and is readying a new electric performance car, which will be revealed at this year’s Pebble Beach Concours d’Elegance on 18th August.

This newly released image of the car’s rear end indicates that it will bear a new design taking influence from the brand’s iconic DMC-12, rather than being a total modernisation of that car.

The new DeLorean will adopt a two-tone body finish with a sloping roofline and horizontal slats along the rear window – a small nod to the DMC-12. A thin LED light bar will span across the rear end and into a pair of muscular haunches that rise above the rear wheels, and DeLorean hasn’t followed the industry trend of digital door mirrors, instead fitting a set of slender, conventional items. Elsewhere, there looks to be a deep rear diffuser and a DeLorean nameplate beneath the left taillight.

DeLorean has previously released the below teaser video on Twitter and YouTube to announce the arrival of the new EV, which the firm is developing with Italdesign – the styling house that penned the original DMC-12.

Speaking on the Italdesign collaboration, DeLorean marketing boss Troy Beetz said: “We are very excited that the next evolution of the DeLorean brand will be represented by our storied partnership with Italdesign and a vehicle that will showcase our vision for the future”. 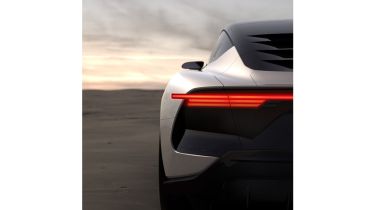 Let’s clear things up a bit. The next generation of DeLorean is coming into focus August 18, 2022. For more information read the press release here: https://t.co/Q4Rax2aBC1 #DeLorean #DeloreanEVolved #firstlook pic.twitter.com/H0t0i4ODqv

From the teaser video, it’s clear that the new model’s overall silhouette will be inspired by the DMC-12, with a similar windscreen shape, long bonnet and gullwing doors to the silver screen icon. At the front, there’s a new DeLorean badge which runs the full width of the car, along with a pair of narrow headlights.

DeLorean’s first, and until now only, model was powered by a 2.8-litre V6 engine, which developed 130bhp and 207Nm of torque. And, while powertrain details for this new car still haven’t been confirmed, it will be all-electric.

The original DeLorean DMC-12 found its fame in the 1980s sci-fi film franchise, Back to the Future. However, while the car became a big-screen legend, the company that built it faded into the annals of history, folding only a couple of years into the car’s production run after a spate of financial problems and production difficulties.

DeLorean (at least as a nameplate) recently found its feet again thanks to Stephen Wynne. Back in 1995, he bought up the rights, branding and remaining parts inventory for the firm and set up a new private company headquartered in Texas with the aim of supporting the existing network of owners with parts and servicing.

Are you excited about DeLorean’s return? Let us know in the comments section below…