The theme continues inside – the dashboard fascia and pedals (the latter featuring ‘skip’, ‘stop’ and ‘play’ motifs) have been painted satin gold, with the same shade for the stitching and pinstriping along the leather upholstery. The Marshall logo has been stitched into the seat backrests, too.

Unsurprisingly, a bespoke audio set-up will arrive as part of the upgrades, with a new system conceived by Marshall engineers. It includes new tweeters topping the dashboard and extra door speakers. There’s also an induction charging point for Marshall’s Motif wireless headphones in the glovebox. 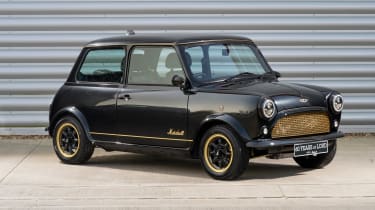 The most striking feature is at the back – a leather-lined boot compartment designed to snuggly fit a Marshall DSL1 Combo amplifier. Along with this, the car also comes with a Marshall Bluetooth speaker.

DBA modernises each car with an infotainment touchscreen, LED headlights, electric windows and keyless go, with the hope of making the diminutive front-wheel-drive hatch easier to live with.

Also key to this is a 1,330cc A-Series inline-four hooked up to a five-speed manual gearbox, normally an optional extra on David Brown’s Mini Remastered cars. The 0-62mph time is  8.9 seconds, and the top speed is just over 90mph. A weight figure hasn’t been released, but if other David Brown Minis are anything to go by, it’ll be well under 800kg for the Marshall Edition.

We don’t know how much DBA’s Marshall-inspired Mini is going to cost, but the Oselli edition was limited to just 60 examples at just under £100,000 each. The Marshall Edition will also be limited to 60 units, and for every car sold, DBA and Marshall will pledge a donation to the Music Trust Venue, which is working to rejuvenate Britain’s independent music scene after the pandemic.