The Lexus RZ 450e will be fully revealed on 20 April at 11:00 BST via a “global event” broadcast online, Toyota’s luxury division has confirmed.  Lexus is gearing up for the launch of its first ground-up electric vehicle, the RZ 450e.

No new information was given along with the announcement, but we already know plenty about Lexus’s first ground-up electric vehicle.

Earlier this year the firm released new images of the SUV ahead of its scheduled debut, when it’ll become a fresh rival for the likes of the Tesla Model Y and the Skoda Enyaq.

It’ll be based on the same e-TNGA platform as the Toyota bZ4X and the Subaru Solterra. But, while the Lexus RZ looks similar in size and shape to its siblings, there are some exterior design differences when you pay closer attention.

The front, for example, is much smoother than the bZ4X’s, while the rear gains a slightly more aggressive diffuser and a pair of winglets atop the tailgate. There’s also an extra ducktail spoiler mounted on the trailing edge of that tailgate, while the heavy plastic cladding around the Toyota’s wheel arches and bumpers has been toned down to give a cleaner, more premium appearance.

Despite the fresh batch of images, we still haven’t seen inside the Lexus RZ’s cabin properly. The company did release a short teaser video which showed the company’s president, Koji Sato, being driven around a test track in a prototype RZ by Akio Toyoda. 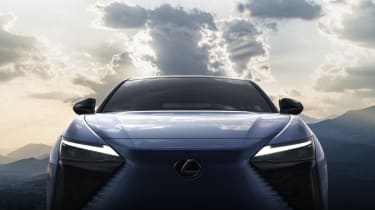 The video didn’t show a great deal of the RZ’s interior, but from what we could see, it seems to have the same layout as the bZ4X, sharing the same high centre console and five-seat configuration. The Subaru Solterra doesn’t have many changes over the bZ4X, and we expect Lexus will adopt the same strategy, meaning the infotainment system should remain, too.

As it’s based on the same e-TNGA underpinnings, the Lexus RZ will be available with the same 71.4kWh battery pack and dual-motor powertrain as the range-topping version of its bZ4X sibling. In the Toyota, the system produces 215bhp and 336Nm of torque, which is enough for a 0–62mph time of 7.7 seconds and a maximum range of 280 miles.

The RZ will also come with DIRECT4, a four-wheel-drive system that constantly monitors the drive force to the wheels and adjusts it based on throttle and steering inputs, as well as road conditions. Lexus says the technology can allow the RZ to shift “from front-wheel drive to rear-wheel drive and everything in between, in the blink of an eye.”

Other technical innovations will include steer-by-wire technology, which removes the mechanical connection between the steering wheel and the front wheels. Lexus claims that this set-up improves steering response to help maximise the benefits of DIRECT4, and allows the driver to perform U-turns with inputs of just 150 degrees.

In theory, this also means that the car won’t have to be offered with a conventional round wheel – and Lexus is already referencing a yoke mechanism that allows the instruments to be seen without peering through a conventional wheel. However, the firm’s European boss told Auto Express that a more traditional wheel design is likely to be offered as an alternative.

Lexus hasn’t yet confirmed pricing information for the pure-electric RZ but, since it is roughly the same length as the hybrid RX, expect the new arrival to be pitched at the top end of the firm’s SUV structure, with a starting figure of at least £50,000.