You could accuse Toyota of being a little late to the party with the all-new GR Corolla, which was revealed this week. An all-wheel drive, turbocharged C-segment hot hatchback that’s able to do skids? We’ve seen that before – perhaps most famously with the Ford Focus RS that came out back in 2015.

The hype surrounding this car was immense. An affordable, fast hot hatch with a ‘drift mode’ seemed like a dream come true for a lot of enthusiasts. But the trick ‘GKN’ all-wheel drive system fitted to the Focus enabling that oversteer-on-demand function (which didn’t result in anywhere near as many embarrassing YouTube crash videos as expected) isn’t in the same league as what lies under the skin of the GR Corolla.

Whenever the Focus oversteered, it felt odd and ‘synthetic’. You could hold a slide without any opposite lock, relying on the car to do everything for you, which seemed strange. The nature of the system means the RS can’t actually send a great deal of torque to the rear wheels, so, once tuning comes into the equation, the car takes on a very different character.

As its 2.3-litre ‘Ecoboost’ inline-four is turned up, the front wheels have to take the lion’s share of the additional performance. I remember driving a Focus RS a few years ago which Essex-based Mountune had tuned to 513bhp and 516lb ft, most of which had to go through the front wheels. At full throttle, it felt like it wanted to dislocate my arms. 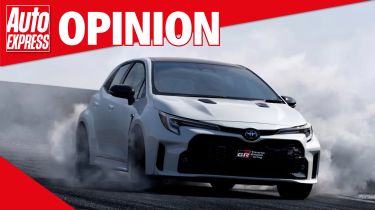 The GR Corolla, on the other hand, does things properly. Along with the 1.6-litre, turbocharged inline-three from the GR Yaris, it also borrows that car’s ‘GR-Four’ all-wheel drive system. It’s also pretty clever, doing without a centre differential and instead using a clutch pack to transfer torque between the propshaft and rear diff.

Just as it does in the GR Yaris, the GR-Four system here gives a 30/70 torque bias in Sport mode, putting up to 100 per cent to the rears if the situation demands. If its little brother is anything to go by, it’ll give a true rear-biased feel without the need for a gimmicky ‘drift mode’. With the 1.6 turned up to 295bhp for the bigger car, it could be even more fun to drive, and this time, there’s enough space to carry a decent bit of luggage and bigger kids or even adults in the rear.

I’ve picked on the Focus RS specifically partly because of the hype surrounding it at launch, and partly since it was the originator of the whole drift mode thing. But plenty have jumped on the bandwagon since – the Mk8 VW Golf R, Mercedes-AMG A45, and Audi RS3 have all tried to do something similar to the Focus. And all of them feel a little bit cynical. The GR Corolla, on the other hand, should have a sense of mechanical purity about it, judging by what we’ve already seen from the Yaris. The only problem? It isn’t coming to the UK.