Its ‘G16E-GTS’ engine is good for 295bhp, up from 257bhp in the GR Yaris. This is much more than the 268bhp a previous teaser seemed to hint at, and although we don’t have performance figures yet, this output should be enough to give the heavier Corolla 0-62mph bragging rights over its smaller sibling. The torque meanwhile stands at 273lb ft.

Another unexpected feature is a six-speed manual gearbox with a rev-matching feature. It had been thought that the GR Corolla would be automatic-only.

This transmission feeds a GR-Four-branded all-wheel drive system which does without a centre differential. Instead, it uses a clutch pack between the prop shaft and rear differential. Go for the Circuit Edition, and Torsen limited-slip differentials go in front and rear as standard.

Along with the LSDs (available on the Core grade car as part of the Performance Package), the Circuit Edition comes with a forged carbon fibre roof, a vented bonnet, a different rear spoiler, suede-trimmed seats and a gear shift knob signed by ‘Morizo’ – the driving persona of Toyota CEO Akio Toyoda. It’ll only be available during the GR Corolla’s launch year. 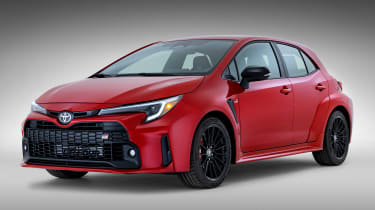 The bodywork features widened front and rear wheel arches, with 18-inch multispoke wheels wrapped in 235mm-wide Michelin Pilot Sport 4 tyres going in at each corner. There’s a much larger grille opening at the front than what’s seen on a standard Corolla, flanked by big ducts. The most unusual feature is at the rear – a triple exhaust with a different-shaped central exit. This design, intended to reduce back-pressure, is key to the G16E-GTS engine’s power increase, Toyota says.

Along with the wider tyres, the GR Corolla gets retuned springs, dampers and anti-roll bars. Slowing things down are four-piston calipers at the front with 355mm slotted discs, with two piston calipers and 300mm rotors at the rear.

The Toyota GR Corolla won’t be coming to the UK, sadly, a Toyota GB spokesperson confirmed. One reason for this could be Gazoo Racing’s ‘Power of Three’ ethos, which involves only three GR models being sold in one market at the same time. In Europe, we already have three – the GR Yaris, the GR Supra and the new GR86. In North America, the lack of GR Yaris provides a ‘space’ for the hot Corolla.

There’s not been a high-performance Toyota Corolla since the T-Sport of the early 2000s, which delivered 189bhp from its supercharged 1.8-litre engine, so the promise of a new GR Corolla is a bold move from Toyota, especially given its direct rivals in the USA will range from the Volkswagen Golf R to the new Honda Civic Type R.