Ford has outlined its plans for further electric cars in Europe by revealing a new ‘start-up’ business unit called Ford Model e, which will deliver three new electric SUVs by 2024. Ford has signed an agreement with Volkswagen Group to secure access to VW’s MEB platform for electric cars, which will form the basis of two of these models – a five-seat, mid-size SUV and a sportier crossover.

These will be built at the firm’s Cologne factory, which is currently undergoing a £1.5 billion transformation from being the home of the Fiesta supermini to an electric car factory with an on-site battery assembly plant. The other new EV will be an electric version of the Puma crossover.

The mid-size SUV will likely be similar in size to the Volkswagen ID.4, using the same technical basis. The MEB architecture can accommodate a 77kWh battery at most, and the brand says that the model will be capable of travelling 311 miles on a charge. The platform can also be used for both rear- or four-wheel drive configurations, with outputs between 146bhp and 295bhp for the most powerful all-wheel drive models. The SUV will be revealed towards the end of this year before going on sale in 2023.

A name for the vehicle has not been confirmed and won’t be until the car is revealed, but our exclusive image reveals how it could look. The SUV will have a chunky look that is a departure from the firm’s current range, with a high bonnet line, a new LED lighting signature and a closed-off grille. The new SUV could give us our first glimpse at Ford’s all-new electric design language when it arrives, and will have a smaller footprint than the Mustang Mach-E. 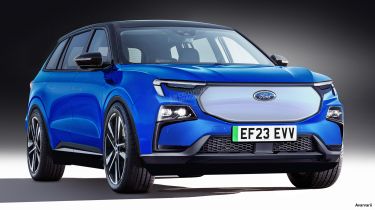 The second electric model from Cologne will arrive in 2024, described by the brand as a ‘sports crossover’ and teased with another new lighting signature. Like the Volkswagen ID.5, it will likely be positioned as a sleeker version of its SUV relative. And despite the shared underpinnings, Ford of Europe boss Stuart Rowley is confident that these new SUVs will separate themselves from Volkswagen’s offerings out on the road: “Let me assure you, these products will absolutely look and drive like Fords.”

Following these two purpose-made EVs will be an electric version of the brand’s big-selling Puma crossover, of which 130,000 were sold across Europe in 2020. It will be built in Romania, taking over the capacity of the soon-to-be-axed EcoSport crossover. No technical details have been confirmed, but to rival the likes of the Peugeot e-2008 a range eclipsing 200 miles will be necessary.

Alongside the passenger car announcement, Ford has also confirmed that four new-generation electric commercial vehicles will be available in Europe by 2024.