For anyone wanting BMW M4 pace with more practicality and a greater emphasis on comfort, there’s a new option from Alpina. The company – which was recently acquired by BMW – has revealed the B4 Gran Coupe, which is powered by the M3 and M4’s twin-turbo ‘S58’ inline-six.

It’s slightly down on power compared to the M4 Competition with its 488bhp output, but the peak torque figure of 730Nm betters the BMW by a considerable 80Nm. The 0-62mph time meanwhile is 3.7 seconds (two-tenths faster than the M4), and the top speed is 187mph.

Its 4 Series Gran Coupe body distinguishes it even more from the official M car, which is only available as a coupe or convertible. Further enhancing its looks is a set of Alpina’s trademark 20-spoke wheels, here in forged 20-inch form and weighing just 12kg each. There’s also an Alpina-branded front splitter, a rear boot spoiler, a quad-oval exit exhaust, and optional Alpina stripe decals. 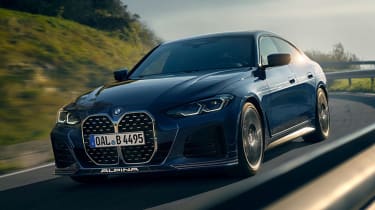 Hinting that the B4 Gran Coupe isn’t a typical uncompromising performance car, Alpina says it “combines emotional driving dynamics with comfortable touring”. Chassis modifications include an additional 1.25-degrees of negative camber for the front wheels, new front anti-roll bars and a bespoke spring and damper setup.

Wrapping those 20-inch wheels are bespoke Pirelli P Zero tyres. During the development of these, Alpina claims “equal emphasis was placed on ride comfort and dynamic characteristics”. Underneath the wheel and tyre combination are 395mm front brake discs squeezed by four-piston calipers, with 345mm discs and floating calipers deployed at the rear. A high-performance braking system with drilled composite discs is available optionally.

Inside, it’s possible to upgrade the interior with naturally-tanned Lavalina leather. There’s a special numbered plaque near the iDrive controller, while the BMW roundel on the steering wheel has been switched for an Alpina logo. Even the digital instrument cluster has been tweaked to display Alpina branding and bespoke colours.