Auto Express understands that the Puma EV will share some componentry with the forthcoming electric versions of the Transit Courier and Torneo Courier vans to keep pricing affordable, and it’s likely to use the existing car’s Global-B platform at its core.

Ford has already released a teaser image of the Puma EV, and our exclusive render previews the design in full. The electric variant won’t be given a drastic restyle, retaining the standard car’s curvy crossover body shape, high-set headlights and sloping rear end. There will be numerous EV-specific tweaks, however, such as a closed-off front grille to improve aero efficiency, a new LED running light design and a slightly cleaner lower front bumper.

The electric Puma will be built alongside Ford’s upcoming electric commercial vehicles at Ford’s Craiova factory in Romania. The brand’s other new electric SUVs – a mid-sized model and a sportier crossover – are set to be produced at Ford’s Cologne plant, which is being converted to an EV manufacturing facility thanks to a £1.5 billion investment. Unlike the Puma, these will adopt Volkswagen’s MEB electric architecture as part of a technical partnership between the two brands. 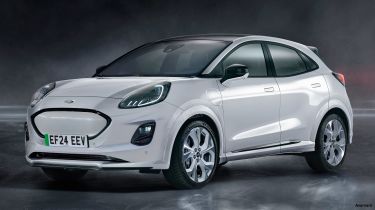 There’s no word on battery size for the electric Puma, but we expect a range of over 200 miles, allowing it to compete with crossover rivals such as the Kia Soul EV and Peugeot e-2008.

The Puma was Ford’s eighth best-selling car in the UK last year, easily eclipsing the Fiesta, which dropped out of the top ten altogether. The Vauxhall Corsa becoming Britain’s best-selling car thanks in part to its electric Corsa-e derivative may give Ford the push to create an all-electric Fiesta using the closely related Puma EV’s battery and motor technology.

However, while the Puma could utilise an adapted version of the Global-B platform using electric van components, this might not be feasible with the lower, smaller hatchback. Instead, an electric Fiesta could adopt Ford’s compact electric van platform, which would be a cost-effective solution.

It is also possible that the Fiesta nameplate could follow the Mondeo and die out altogether. Speaking on an electric Fiesta, Ford of Europe boss Stuart Rowley said: “This will not be the end of the journey. We’ll only sell electric passenger cars by 2030. We look forward to developing future plans.”