The Cupra Born is the first electric car from SEAT’s sporty spin-off brand, and it’s on sale now in the UK, priced from £33,735. The range is gradually filling out, with the most recent additions being of the powerful e-Boost variety.

Later in 2022, Cupra will release a base model with a 45kWh battery and a 148bhp electric motor, available exclusively in V1 guise. This will be the cheapest variant, but a price is yet to be revealed for this version. Cupra says this model can achieve a 0-62mph time of 8.9 seconds and a maximum range of 211 miles.

The Cupra Born is based on the same MEB underpinnings as the Volkswagen ID.3, meaning it shares the same battery packs and electric motors. All Borns are rear-wheel drive and generate 310Nm of torque, with an all-wheel-drive option expected in due course.

Now, Cupra is also offering the 201bhp powertrain with an e-Boost function, which can temporarily increase the motor’s output to 228bhp. The system will be available with either the 58kWh or a larger 77kWh battery, with the latter option increasing the car’s maximum range to 335 miles.

The overboost function also trims the hatchback’s 0-62mph time to 6.6 seconds with the smaller battery and 7.0 seconds with the larger battery. The pricing for the former starts at ​​£37,445, while buyers of the latter must pay at least £40,215.

Alongside the e-Boost pricing announcement, Cupra also gave details of a new PCP deal for the Born, with monthly payments starting at £399. The representative example given involves a Born V2 with the 58kWh battery pack and 201bhp motor, secured with a deposit of £7,338.27. Following 48 monthly payments of £399, there’s an optional payment of £16,613.10. The APR is 6.0 per cent.

Like the Volkswagen ID.3, the bigger battery offers support for 125kW DC rapid charging, which allows 62 miles of range to be added in just seven minutes. Leave the same system connected for 35 minutes and it’ll replenish the battery to 80 per cent.

Cupra also says the Born has been designed to handle well, in keeping with Cupra’s focus as a sportier alternative to Skoda and VW. The battery’s placement low down in the centre of the car’s chassis means the EV has a near-perfect 50:50 weight distribution and much lower centre of gravity than an equivalent combustion-engined hatchback.

Its chassis will be optionally available with adaptive dampers, which have four dedicated settings called Range, Comfort, Individual and Cupra. Speed-sensitive power steering also features, as does a specially calibrated traction control system that the brand says is designed to keep the Born moving in all conditions.

The new Cupra Born is a little more rakish than the Volkswagen ID.3. At 4,322mm long and 1,537mm high, it’s around 100mm longer and 30mm lower than its sibling, although its width remains unchanged at 1,809mm. 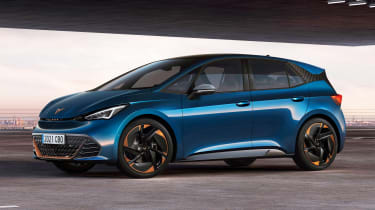 Its styling is pretty much identical to that of the SEAT el-Born concept from the 2019 Geneva Motor Show. Cupra has kept its short bonnet, large quarter light windows and tailgate spoiler, while adding its trademark copper-coloured trim to the front splitter and alloy wheels. The Born is available in a choice of six colours.

Cupra has also retained the el-Born concept’s unusual textured C-pillar panel, which it says “gives the impression of a floating roofline.” The slim grille and large bumper intake are new additions, though, which the company says have been designed to channel air towards the EV’s radiator to help keep the battery cool.

LED headlights are fitted as standard, and feature an animated signature that is activated when the driver approaches the vehicle. Cupra-branded puddle lighting will also be available, and buyers will be offered a choice of six paint finishes and three alloy wheel designs, with one 19-inch and two 20-inch options.

Inside, there’s a pair of bucket seats, more copper-coloured highlights, a digital instrument cluster and a multifunction sports steering wheel with a drive-mode selector button. Unlike the ID.3, which comes with a 10-inch touchscreen as standard, every version of the Born has a larger 12-inch infotainment system.

Cupra offers a choice of two eco-conscious leather-free upholstery finishes, called Seaqual Yarn and Dinamica. The first is made from upcycled marine plastics, which have been collected from beaches, rivers and the ocean floor. The plastic is then cleaned, treated and spun into yarn which has similar properties to polyester.

Dinamica is another recycled material, which is made from polyester fibres reclaimed from old clothing and single-use plastics. It’s exclusively available with the Born V3, and comes in either Dark Blue or Grey colour finishes. The rest of the range receives the Seaqual Yarn upholstery as standard.

On top of the standard equipment, Born customers can choose from a number of optional extras, such as a Beats stereo system, a panoramic sunroof and Cupra’s Cargo Pack, which adds a double boot floor and a mode 2 charging cable. The Tech Pack features a parking assist system, alongside advanced keyless entry with illuminated door handles and wireless phone charging.

A range of additional safety systems can be specified via the Pilot Pack. This includes rear cross-traffic alert and a 360-degree camera, as well as the parking assist function. Exit assist is bundled in, too, which provides audible and visual warnings for vehicles in the driver’s blind spots when on the road, as well as for approaching traffic when the vehicle is parked and an occupant goes to leave the car. The Pilot Pack also includes Cupra’s semi-autonomous travel assist, which can assume control of the Born’s steering, throttle and brakes on the motorway with the driver’s supervision.

Like all of the Volkswagen Group’s MEB vehicles, the Cupra Born has a long wheelbase relative to its overall length, which means it should maximise interior space. It also has a slightly larger boot than the SEAT Leon, at 385 litres.